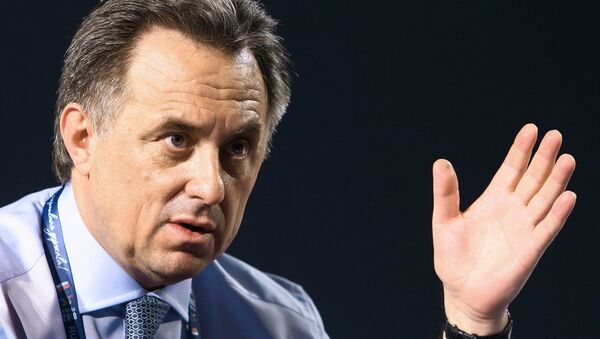 The International Olympic Committee (IOC) and sports federations are not fulfilling their responsibilities by allowing Russian athletes to become the target of abuse at the Rio Olympics, Russian Sports Minister Vitaly Mutko said Thursday.

"The organizer must stop the competition and tell the fans to stop discriminating against the athlete, otherwise the competition will stop. They must do this, but nothing was done, nothing was stopped. I always say that international organizations are not just overseers, they are also event organizers and operators. They must protect all countries and all athletes… And they are not fulfilling their functions," Mutko told R-Sport.

Russian Olympic Committee Chief Says IAAF Adamant on Ban for Russian Athletes
Mutko warned fans against antagonizing athletes from rival teams adding that there are international conventions against discrimination in sports. The Russian sports minister stressed  that the IOC and international sports federations should have more than just condemn the antagonizing of Russian athletes in hindsight.

King slammed Efimova for being caught "drug cheating" and stated that she was "not a fan" of the Russian swimmer. Finishing first in the women's 100-meter breaststroke on Monday, King did not congratulate Efimova but hugged US swimmer Katie Meili, who won a bronze medal. Phelps also made remarks on Efimova's previous doping violation. The swimmer was also jeered by US team supporters during several Olympic events.

On the eve of the Rio Olympics, Efimova was cleared by the International Swimming Federation to take part in the competition, successfully winning her appeal against a doping ban imposed in July.