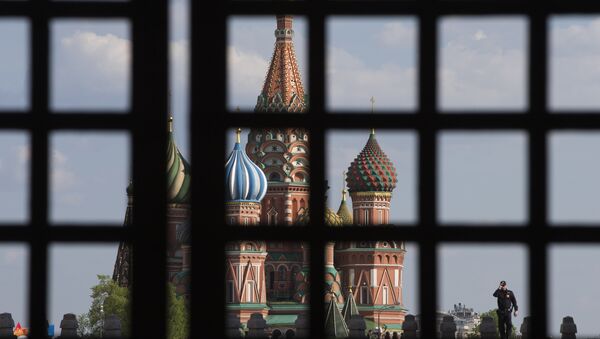 Nikolai Gorshkov
All materials
The latest spate of allegations by western media and politicians about Russian propaganda is nothing new. The UK Cabinet files from 1980-s just released by National Archives in London reveal the British establishment's obsession with a propaganda war against Moscow.

Ministers were worried over "the confused state of British public opinion (America seen as a great a threat to peace as Russia)" and "a strong strain of anti-Reagan and anti-American sentiment". They put this down to "Soviet propaganda" and the gullibility of the British public. 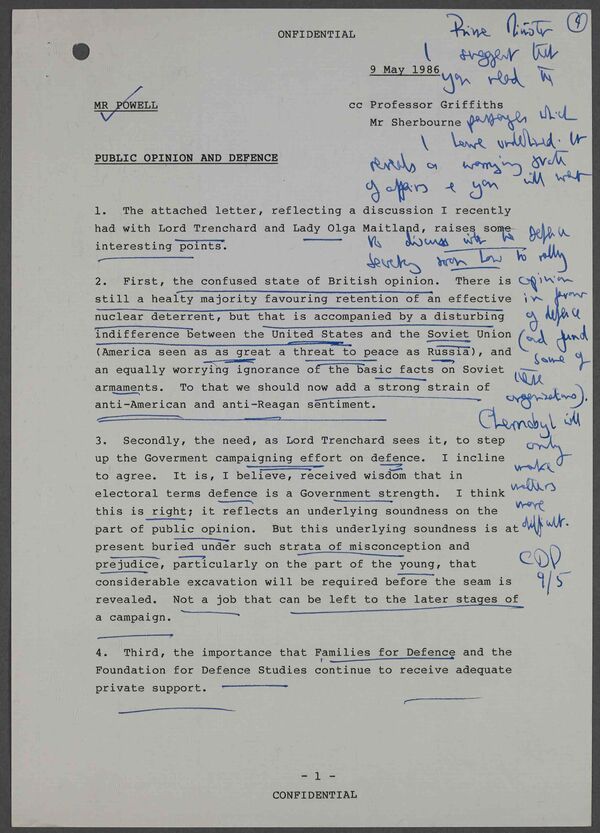 A number of memos to Prime Minister Thatcher recommended countering this with support for pro-government groups in the UK as well as expanded radio broadcasts to the Soviet Union and its "satellites" to "project" wculture and wean the countries of Eastern and Central Europe off their alliance with Moscow.

But the story of anti-Russian propaganda goes far back than last century.

'Contempt for the Russian People'

Over 460 years ago an English navigator Richard Chancellor arrived in Moscow via the Russian port of Archangel on the White Sea. He was entertained by Tsar Ivan the Terrible who granted freedom of trade to English merchants, looking for a direct route to China to bypass the monopoly of Venice. Despite this hospitality, the English almost immediately formed a view of Russia as a "barbaric" country.

Anthony Cross, Emeritus Professor at the Department of Slavonic Studies, University of Cambridge is the editor of 'A People Passing Rude: British Responses to Russian Culture'.

"Among the earliest and most influential Elizabethan accounts of Russia were those collected and published by Richard Hakluyt in two editions at the end of the 16th century, but two other publications, appearing before Hakluyt but then included by him in emasculated form, were influential in establishing a largely negative perception of Russia that extended way beyond intense cold and ubiquitous bears to religious obscurantism, tyrannical rule, and almost willful ignorance."

Professor Cross took the title for his book from an epistle by the English poet George Turbervile, secretary to Thomas Randolph during his embassy to Muscovy in 1568, who entertained London society with damning depictions of "a people passing rude to vices vile inclin'd."

In a much more scholarly 'Of the Russe Commonwealth' treatise another English Ambassador Giles Fletcher (1588-9) described Russians as ignorant and godless.

The famous author of "Paradise Lost" (and "Regained") poet John Milton also had a jab at the Russians. In his 'Brief History of Muscovia', a compilation of 16th century accounts, published posthumously in 1682  he echoed Fletcher in suggesting that the Russians ‘have no learning, nor will suffer it to be among them'.

Milton claimed his book was based on witness accounts.

But as an American researcher of Muscovia John B Gleason observed:

"No one seems to have asked whether the eyewitnesses were truthfull, well-informed, conscientious. The Muscovia never raises such questions but uses every kind of assertion indiscriminately."

Another expert on the subject Lloyd E Berry has identified "two 'thematic' similarities between Giles Fletcher's and Milton's books on Russia:  "pride in the accomplishments of the English people and [their] system of government" and "contempt for the Russian people" and "Russian institutions."

Russian Spies at the Palace

This western contempt for Russia and its people manifested itself during the Crimean War of 1853-56.

Nearly 160 years ago, a Frenchman and a Russian fired at one another in the Crimean War and their bullets collided. pic.twitter.com/ojSczcySeV

​Russia had been putting military pressure on the Ottoman Empire in an effort to force political concessions from Turkey, particularly in regard to the governance of Orthodox Christian populations of the Balkan lands under Ottoman rule. Russia expected support from the Christian rulers of Britain, France, Prussia, and Austria, but both Catholics and Protestants of Western Europe viewed Muslim Turks as a lesser evil than Orthodox Russians.

​In a Punch parody of an Orthodox Christian icon, the Tsar is seated on cannon balls, with a ramrod as a crozier, a mortar as a mitre, and a halo of bayonets.

That the Balkan peoples who rebelled against the Ottomans saw Russia as their protector and liberator made London, Paris and Vienna worry more about geopolitics than national aspirations of the oppressed.

It was England, particularly the Home Secretary Lord Palmerston, and the British press, led by The Times and the satirical magazine Punch who pushed hardest for the western powers to declare war on Russia. Such was the war fever brought about by the press that rumours abounded about Queen Victoria's husband, Prince Albert, being a Russian agent. Thousands waited by the Tower of London to see Prince Albert escorted into the infamous prison.

In a reference to Aesop's fable about bees defending their hive from an intruding bear a Punch cartoon shows Turkish, Austrian, Prussian, French, and English 'bees', protecting the ‘hives' of Constantinople, the capital of the Ottoman Empire, against the angry Russian 'bear'.

The first depictions of Russia as a fearsome beast appeared in the 16th century Poland who was trying to establish its influence over its "less European" brethren. But it was the English who mastered the art almost to perfection. The first ever allegory of Russia as a bear appeared on a series of English engravings 'The European Race' started in 1737.

The Punch, established in 1841 made this allegory a household item. From then on the fearsome beast has been invoked each time the West wanted to depict Russia as a savage country.

Even the infamously bungled charge of the Light Brigade at the Battle of Balaclava was used by The Times to belittle the Russians as compared to the English:

"If the exhibition of the most brilliant valor, of the excess of courage, and of a daring which would have reflected luster on the best days of chivalry can afford full consolation for the disaster of today, we can have no reason to regret the melancholy loss which we sustained in a contest with a savage and barbarian enemy."

The British were equally disdainful towards their Turkish allies whom London purported to "save" from the Russian "bear."

In 1921, after the end of the Russian Civil War and military intervention by Britain, the United States and a dozen other western countries, a group of American journalists went to Moscow. Their task was to report on the changes happening in Soviet Russia. The Soviet government lent them rooms at the Savoy Hotel free of charge. Much later, in a book by an American journalist Whitman Basso 'The Moscow Correspondents: Reporting on Russia from the Revolution to Glasnost' they reminisced about the challenges they faced.

They admitted they did not know the language, the history, the politics, or very much about the men who shaped the momentous events. Among the inhabitants of the Savoy Hotel there were no Soviet experts, nor even, as British journalist Paul Winterton later put it, people with "varying degrees of ignorance." What little they knew about Soviet Russia they probably learned from their own newspapers.

'Moscow's Orders to Our Reds'

British journalists appeared to be a lot more knowledgeable than their American colleagues at the time but many used their knowledge of Russia in a peculiar way.

In 1924, the Daily Mail published a forgery that threw Anglo-Russian relations off-course for a long time. The Daily Mail made the most of a fake letter allegedly written by the head of Comintern Zinoviev to the British Communists, calling it "Moscow's orders to our Reds." Following the publication of the forged letter London reversed its decision taken earlier that year to recognize Soviet Russia and cancelled a treaty with Moscow that was meant to move the East-West relations from confrontation to cooperation.

It could be argued that it was this letter and not Churchill's Fulton speech 22 years later that laid the foundations of the Cold War. It is not widely known that Churchill borrowed his famous — or infamous — reference to the 'Iron Curtain' from no other than the ace of Nazi propaganda Goebbels who had used the metaphor to justify war on communism.

The relay was swiftly picked up by the American press. "Every Communist is Moscow's Spy" was the battle cry of Senator McCarthy's 'Un-American Activities Committee' in the 1950s.

​Even Hollywood wartime films about the anti-Nazi alliance with Moscow, commissioned by the White House, were declared pro-Soviet propaganda. The Russian bear leaped from the British onto of the American pages. In time for the Olympic Games in Moscow the top-selling Rider's Digest magazine called on the Americans to "Stand Up to the Russian Bear."

The US athletes boycotted the Games, but the rest of the world saw a different kind of bear — a huggable Olympic mascot Misha The Bear who shed a tear of sorrow at the Moscow Olympiad's closing ceremony.

Since then Russia has shed its communist past but the West does not appear to be ready to drop its propaganda war.

Summing it up in 2014 Roger Cockrell wrote in Slavonic and East European Review:

"Time and again we are reminded of the ambiguities in British attitudes towards Russia and Russian culture, covering the spectrum from extravagant praise to profound distrust, and embracing purely negative traits such as ignorance, fear, stereotyping and condescension. How many would argue that such reactions and attitudes belong simply to the past?"

Two years on such attitudes are stronger than ever…