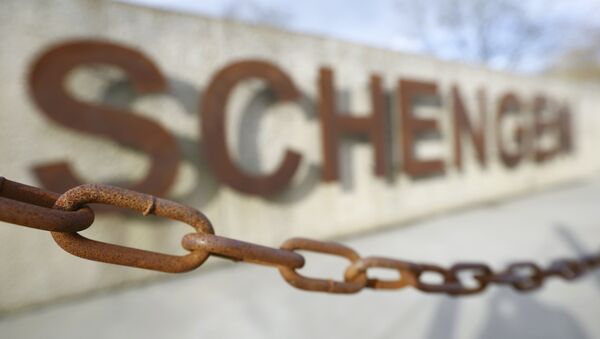 European defense should not just depend on NATO, and the concept of a Defense Schengen is vitally important, French MP Yves Pozzo di Borgo told Sputnik.

NATO' Future: 'Era of Free-Riding' is Coming to an End for Europe
In an interview with Sputnik, French MP Yves Pozzo di Borgo praised the idea of creating a so-called Defense Schengen which he said would play a significant role in ensuring European security.

The interview came after the French daily Le Monde published an article by the Italian Defense and Foreign Affairs Ministers, Roberta Pinotti and Paolo Gentiloni, who called for launching a new project – "a kind of a Defense Union", or a "Defense Schengen."

Di Borgio recalled that in June, the French parliament approved the resolution on European defense which was then submitted to the European Council and NATO.

"So it is safe to say that the Italian Ministers' initiative is the continuation of efforts by the French MPs," he said.

He explained that the project's goal is to create a European defense system that would complement NATO, which he warned is unlikely continue to allocate money for European defense-related issues.

He added that there is no need to wait for the Baltic States to push for the creation of a European defense, because relying on these countries will ultimately lead to Europe’s continued dependence upon NATO.

In a clear nod to Italy, he specifically pointed to the fact that the ministers of the country, which depends heavily on the United States, is calling for the application of Articles 44 and 46 of the Lisbon Treaty allowing countries seeking to create a European defense to do it on their own.

"A NATO summit in Warsaw did not go as expected, because many Europeans believe that it is impossible to stay within the European defense system dependent of NATO. It's an unthinkable thing that Americans now finance 75 percent of NATO defense-related issues. We need to take defense into our own hands," he pointed out.

In their article in the Le Monde, the Italian Ministers said that the outcome of the British referendum on withdrawing from the EU and the recent terror attacks in Europe should prompt the EU member states to take effective security measures, including in the defense sector.

This is Why NATO Summit Was Not About Peace and Stability in Europe
As for a Defense Schengen, the aim of the initiative will not be the creation of a "European Army," but of a "European Multinational Force." According to them, the force will include a single command and budget and it will not compete with NATO, but rather supplement the alliance.

As far as the latest NATO summit is concerned, it took place in the Polish capital Warsaw between July 8 and July 9. The alliance agreed to deploy four battalions to Latvia, Lithuania, Estonia and Poland. Member states also decided to launch a European missile defense shield and bolster their presence in the Black Sea.