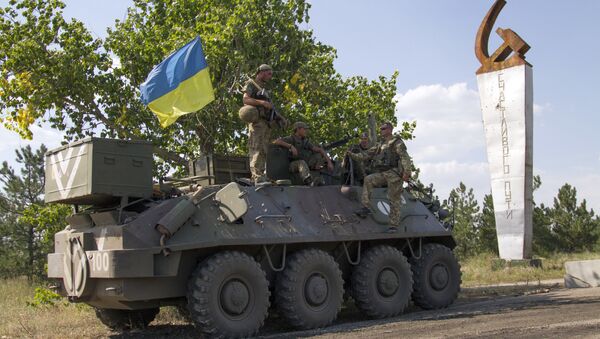 © AFP 2021 / SERGEY VOLSKII
Subscribe
For over two years, Ukrainian authorities have been making claims of a Russian invasion of eastern Ukraine involving thousands of regular troops. Now, a sensible voice in Ukraine's own parliament is asking authorities to provide evidence for the oft-repeated claims.

In April 2014, a couple months following a coup d'état which toppled Ukraine's former government, Kiev launched a military operation against rebellious residents in the Donetsk and Lugansk regions, who were angry over the putsch and fearful of the new authorities' threats against the country's Russian minority.

Human Trafficking Rates Intensify in Ukraine Since Start of Donbass Conflict
The military operation has left large areas of these regions destroyed, thousands dead and over two million people displaced. From the start, the government in Kiev has accused Russia not only of supporting the self-proclaimed republics, but of intervening directly using the regular Russian army.

At various times, Ukrainian President Petro Poroshenko has told Western reporters of a Russian invasion of eastern Ukraine involving some 9,000, 50,000, or even 200,000 troops. For a long time, Western media believed him. Some still do. In a scandalous interview with ABC News host George Stephanopoulous late last month, Republican presidential candidate Donald Trump questioned the media narrative that Russia had invaded Ukraine, resulting in a frenzy of media commentary attacking him for being 'wrong' about Russia 'not going into Ukraine'.

But whether or not the Western mainstream media continues to take Ukrainian authorities' claims at face values, their leaders' patience for Kiev, and the country's political instability, its depressed economy and the never-ending string of corruption scandals (starting at the top with President Poroshenko himself) is slowly coming to an end.

In a recent article in Foreign Policy, contributor Askold Krushelnycky, a UK-based journalist with Ukrainian roots, repeated the standard line about Russia being "at war with Ukraine." Nevertheless, the journalist admitted, "despite the seriousness of the threat from the East, Moscow isn't the worse enemy the Ukrainians face. Given the self-inflicted [harm] that has infected every facet of business and government, the country's worst enemy may be its own leaders."

Krushelnycky noted that Kiev's Western backers, including the United States and its European allies, are quickly losing patience with the country. "Ukraine fatigue," the journalist wrote, is setting in in the Western capitals, "and the next time they turn to the West for help, they might find that they are truly on their own."

It's not just Western governments which are becoming fatigued with Ukrainian authorities. The country's own political class is becoming increasingly concerned with the state of the country. On Thursday, Evgeny Muraev, an MP from Kharkiv in Ukraine's northeast, went on national television and directly questioned the holiest of holies – the idea that Russian troops were fighting in civil-war-torn eastern Ukraine. 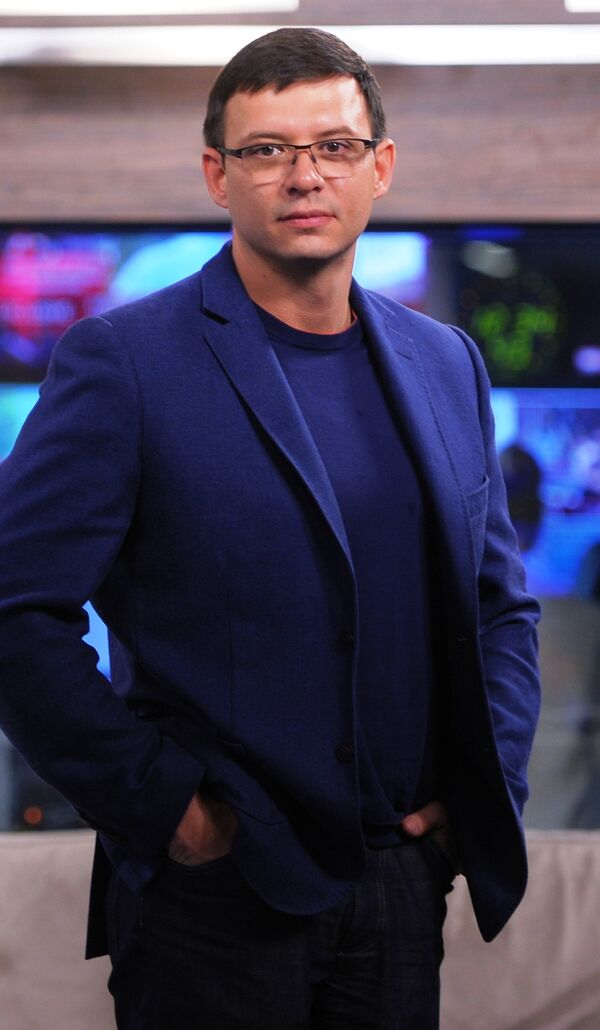 Evgeni Murayev
© Wikipedia / tov_sergeant
In the explosive interview for Ukrainian news channel 112 Ukraina, Muraev criticized the government's failed political and economic policies, and said directly that after over two years of conflict in the east of the country, Kiev has not yet been able to provide any convincing evidence of Russian military involvement there.

"We hear about a million proofs [of Russian aggression in eastern Ukraine]," Muraev noted. "Let's present them to the world! In Europe, they no longer take such statements seriously."

Unfortunately, he added, the authorities aren't willing to provide even their own people's representatives with evidence to that effect.

The MP explained that a month ago, he submitted a formal request to the Security Service of Ukraine (SBU) and the country's Ministry of Defense, asking them to provide information on exactly which Russian military units are involved in the conflict.

"According to the law on the status of parliamentary deputies, they were required to provide me with an answer, but neither the SBU nor the Ministry of Defense has given me with any information about it," the lawmaker complained.

US Ambassador Pyatt's Parting Message to Ukraine: Hang In There Guys!
Effectively, Muraev suggested, Ukrainian, and the rest of the world for that matter, are simply being deceived by authorities in Kiev.

"Every television set across the country is saying that these [Russian units] exist somewhere – so [let the government] show them! Then no one, either in Europe, in Ukraine, or anywhere would have any doubts," the MP noted.

Meanwhile, the fragile peace in Donbass is continuing to deteriorate. On August 2 alone, authorities from the Donetsk People's Republic reported that 161 artillery shells had being fired into their territory. In neighboring Lugansk, the head of the self-proclaimed republic, Igor Plotnitsky, survived what appears to have been an assassination attempt on Saturday following a car explosion.

Meanwhile, authorities in the self-proclaimed republics have said that they are increasingly concerned over the rhetoric coming out of Kiev, and worried that the Ukrainian military may try to resolve the frozen conflict there by force.

000000
Popular comments
The whole of Ukraine would be Russian within a week if Putin decided to take it, but they don't want the wannabe "Nazis". I live in Norway, and I am embarrassed by how we treat our neighbour. We are a NATO country, so we get all the propaganda about how bad and scary the Russians are. Every lie about what's happening in Ukraine has been served to us as delicious desserts . All I can say is that I am sorry on behalf of our politicians and journalists in my country, they don't know better.