Humor in the Sky: How Russian Pilots Joke With Their Passengers 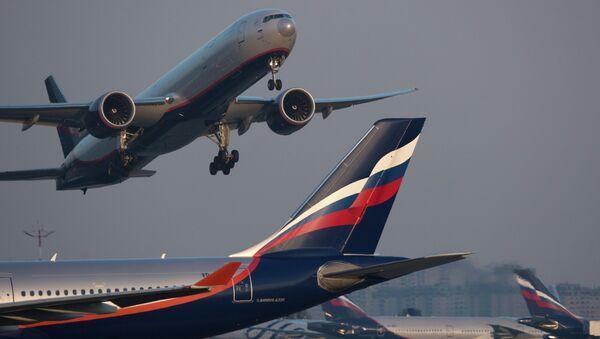 © Sputnik / Maksim Blinov
/
Go to the photo bank
Subscribe
Pilots have a strict set of rules to follow when speaking with their passengers. However, in some extraordinary cases, they can abandon a couple of regulations and even make jokes to help passengers relax.

However, communication with passengers is very important and leaves a good impression of the air company as a whole. Sometimes, one joke can calm a mischievous passenger or help people relax if the plane has to make an emergency landing.

Life.ru gathered some examples of how Russian pilots manage difficult situations and deal with their passengers in the following cases:

Russian Pilots Show Off Combat Skills at Aviadarts-2016
To calm an aggressive person, pilots often have to act beyond the regulations. If the safety of the passengers is at stake, they are allowed to do almost anything to resolve the situation.

"Once we had a small riot on board while the plane was flying over the border between Afghanistan and Iran. To calm down the passenger, I announced that if he wouldn't calm down, I would give him the right to choose in which country we will make an emergency landing," pilot Dmitry said.

"When someone smokes during the flight, the alarm sounds and I usually say something like: Ladies and gentlemen, I remind you that smoking on board our aircraft is strictly prohibited. If we all want to reach the beautiful city of Paris, then please refrain from smoking. Ah, yes, the person with the bad habit will be greeted not only by Minzdrav [Ministry of Health], but also by the police," pilot Pavel added.

Emergency landing at the alternate aerodrome is a standard situation, which may occur because of poor weather conditions or a lack of fuel. However, many passengers still get nervous when they hear the scary words, so the captain usually tries to calm them down.

"One day I announced that we will land in Nizhny Novgorod, and to encourage the passengers I said: I understand your concerns, I also planned to spend this evening at home and my hungry cat was counting on me. But, unfortunately all we can do is to stay at an alternate aerodrome and wait for the weather at Sheremetyevo to improve," Pavel said.

The most common reason for a go-around is when the airport is overloaded.

"Often we joke about a sightseeing tour around Moscow or say something like: please look around — it's a great opportunity to choose the house or cottage of your dreams. It helps the passengers to relax, and they really stare out of the window," Pavel said.

Another of Pavel's jokes sounds like this: "As you probably know, Moscow is famous for its traffic jams. Now, you have the opportunity to experience traffic jams in the air. The flight zone over Moscow is currently overloaded, so our landing will be delayed by half an hour. Thank you for your understanding."

The Heroes Come Home: Russian Pilots Welcomed on Their Return From Syria
At the same time, pilots never talk with their passengers about extraordinary situations that occur during the flight. This is a strict rule followed by everyone.
If at least one of the passengers misinterprets the words of the pilot, he or she may cause panic on board the aircraft.

Therefore pilots often have to hide incidents and lie about them so that passengers and even flight attendants do not know what's really going on in the crew cabin.

000000
Popular comments
A South African domestic airline, Kulula.com, from its inception have done this too. At first people viewed it as a marketing ploy, but because the airline is such an affordable and caring one, its reknown today for both its humour and service.