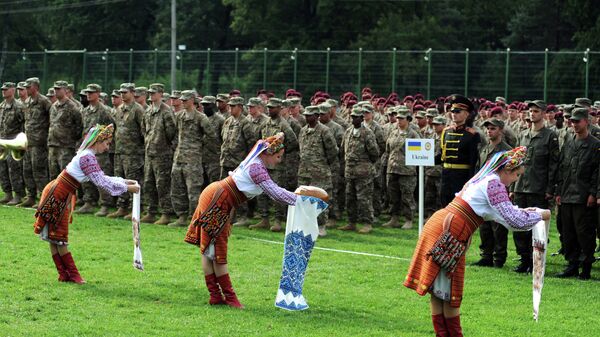 "I think what the US really needs to do in Ukraine is to get an assessment team from the United States Armed Forces to go in and really do a systematic assessment of their defense needs and their structure and do it on a quiet basis," he said. "Now we are doing training for them but to the best of my knowledge we have not done an assessment."

The United States remains uncertain about Kiev’s objectives in the Donbass region and with Russia, Clark added.

"The key is to systemize and have an agreement about what the Ukrainians are trying to do. Are they just trying to hold their lines and get a political solution? What’s really going on over there and what do they really need?" he said.

In 2014, Clark traveled to Ukraine at the invitation of the national security adviser and a member of parliament to conduct a private assessment of Ukraine’s security needs which he summarized in an interim report.

German Playwright Warns US is Provoking 'Civil War' Between Ukraine, Russia
Clark was unaware of any on-the-ground assessments done in Ukraine by the US military.

In March 2015, Clark called for intelligence coordination between Ukraine and the United States to gain a better understanding of alleged "Russian maneuvers."

Southeastern Ukraine has been the scene of a conflict that erupted as a result of a military operation against local independence supporters launched by the Kiev authorities in April 2014 after Donbass residents rejected the coup-imposed government.

In February, the warring parties signed a deal on Ukrainian reconciliation in the Belarusian capital, Minsk. However, numerous ceasefire breaches have been reported in Donbass since the Minsk peace deal was signed.