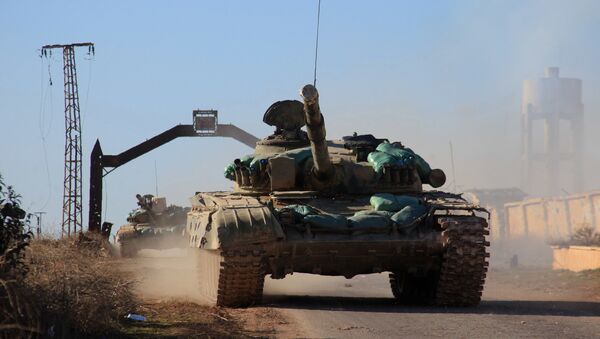 Syrian armed forces have managed to successfully repel a massive offensive by the besieged Nusra Front terrorists, which began early Sunday, capturing a warehouse of US-made weapons in process.

Syrian Army Wrests Control Over Strategic Heights in Al-Badiyah (VIDEO)
A fierce battle sparked today at the Southern and South-Western outskirts of Aleppo, some 223 miles (360 km) from Damascus, as several units of Jabhat Fath ash-Sham (former Al-Nusra Front) terrorist group tried to attack parts of city that are under government control. The offensive has been concentrated around Ramouseh district, on the South-Western part of the city.

"Fighters of the government forces repelled the militants and inflicted casualties upon them," reports Al Manar TV channel.

If the militants succeeded in their attack, they would have breached the Syrian armed forces lines and likely would have established a supply route for militants trapped inside.

Conflict News reported two major suicide attacks that blew up massive columns of dust and smoke which could have been seen from a long distance.

​In a desperate attempt to shield themselves from Russian airstrikes, militants resorted to burning tires to create a smokescreen over the city.

​​According to Russian Ministry of Defense, the Syrian armed forces managed to capture a weapons warehouse. The warehouse, which belonged to the Daesh and Nusra Front militants, contained a significant amount of US-made weapons. A video, released by Anna News, shows US-made ammunition, mortars and even TOW-2 anti-tank guided missile.

A Russian-Syrian humanitarian operation began on Thursday in Aleppo, with three humanitarian corridors opened in the city to allow the trapped civilians and surrendered militants to reach safety. Four more corridors are set to be established in a near future. According to Lieutenant-General Sergey Chvarkov, the head Russian reconciliation center in Syria, 169 civilians and 69 militants who chose to lay down arms have already fled the besieged city.