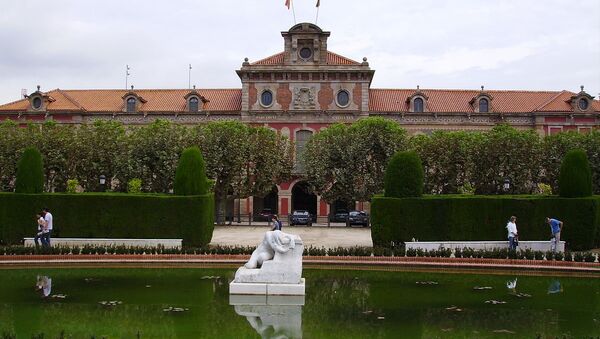 The Catalan government has pushed forward the process of the region's secession from Spain, as Madrid fails to demonstrate cooperation on the issue, the Catalan officials said.

Chain Reaction: Brexit Invigorates Pro-Independence Sentiments in Catalonia
MOSCOW (Sputnik) — In November, the Catalan parliament put forward a resolution calling for a start of secession from Spain as the Catalans voted pro-independence in a 2014 referendum. So far, there has been little progress on the part of Madrid on the issue, and later this week, Catalonia is expected to debate the conclusions of a working group on sovereignty.

"The [Spanish state] has left us feeling that we just don’t have an alternative… We have always said that we would have preferred a Scottish-type scenario, where we could negotiate with the state and hold a coordinated and democratic referendum. We keep talking to Madrid, but all we get back from them is an echo," Catalan Foreign Minister Raul Romeva told The Guardian.

Romeva said the Spanish government could either accept the reality of Catalan independence or go with the neglect policy, which is "denying that reality in the belief that it can use the constitutional court and legal processes to stop it."

Spanish Minister Refuses to Resign After Compromising Leak on Catalonia
Carme Forcadell, the president of the Catalan parliament, recalled a recent scandal when Spain’s Interior Minister Jorge Fernandez Diaz and head of Catalonia’s anti-fraud office Daniel de Alfonso were recorded discussing possible investigations which could be launched against pro-independence politicians.

"How can they say that when the interior minister, who’s meant to defend the interests of all citizens, is caught conspiring to find evidence against citizens solely because they think differently? How can absolutely nothing come of that? We don’t understand it," Forcadell told the newspaper.

Catalonia has long sought independence from Spain, but the Spanish government has repeatedly declined to grant the region independence, saying it would violate the country’s constitution.

Catalonia held a non-binding referendum on independence from Spain in 2014. Over 80 percent of those who participated voted in favor of the autonomous community becoming an independent state. In November, the Catalan parliament issued a resolution to start seceding from Spain.