US Political Prisoners That Don’t Even Exist, According to Obama 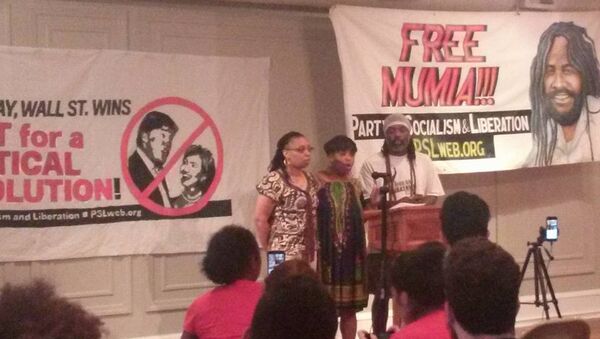 © Facebbok
Subscribe
On Sunday, a Philadelphia community center was standing-room-only for a forum calling for President Barack Obama to free all political prisoners on the eve of the Democratic National Convention.

​Puryear pointed out that although the US has been incarcerating people for their political activities for decades, it does not acknowledge that there are political prisoners in the country.

"The reality is there are dozens and dozens of political prisoners inside of jails inside the United States of America," he said. "The vast majority of them are people who were arrested due to various activities related to the liberation movements that grew up in the 60s and 70s, and some folks who continued to be active in the 80s, but certainly this is a country that denies having political prisoners."

Russell "Maroon”"Shoatz, so-named for his two prison escapes, was a member of Philadelphia’s Black Panther Party and was convicted in 1972 for the shooting death of a police officer. Loud and Clear host Brian Becker said to his daughter, Theresa, "Your father was held in solitary confinement for decades, that’s really a form of torture."

Shoatz explained that she once had full confidence that the American justice system would release her father, but she felt the need to make his case public when she realized how extreme his living conditions were. This moment of clarity came when she noted her father’s surprise at being told he was going gray.

"He said 'They don’t give us mirrors, I have nothing that would show a reflection of myself. I haven’t seen my face in over 20 years,'  and it crushed me…it was devastating."

She said her father knew that taking a revolutionary stance would have its consequences, but that it was worth it if it meant that his family wouldn’t have to deal with the same issues he has had to shoulder.

Cuba Releases All 53 Political Prisoners on US List: Reports

"He said, 'I didn’t want to leave your mother and your sister, but I didn’t want leave this rotten system for you to grow up in.' He’s happy to see that this generation has taken up this struggle and is moving forward."

Describing how the struggle of political prisoners from decades past influences young activists today, White said, "The youth in Philadelphia really want to connect with those revolutionaries and we want the youth movement to be a movement of liberation for those who have sacrificed so much for us."

She added, "I think this issue is really energizing the youth, because when these young people become radical it is from the writing and the speeches of Mumia Abu Jamal and from the actions of the MOVE family and of people like Russell 'Maroon' Shoatz, and we need those people to be liberated from their prison cells because they are leaders and I think that’s what the youth are coming around to see, that we can’t have a movement for black lives that doesn’t include incarcerated people."

White also said that the strength of the current Black Lives Matter movement is its diversity and increasing radicalism.

"I think this movement is very eclectic right now, and I think that’s a good thing because it’s very vibrant. What we see now is an effort to co-opt this movement and that’s how you know it’s strong and powerful."