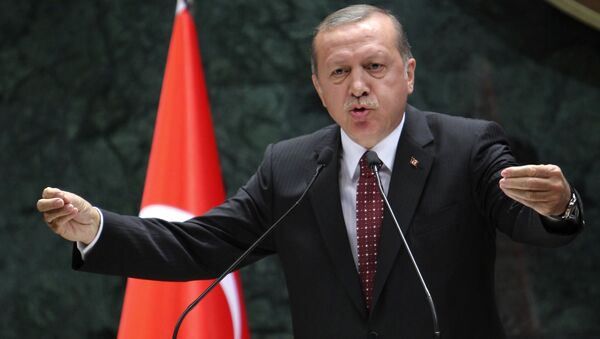 While European states express their concerns about the developments that take place in Turkey, Brussels still seeks to rescue the deal with Ankara on refugees.

At the same time, Erdogan's actions cause ever growing concerns across the EU. In an interview with German magazine Der Spiegel, Austrian Foreign Minister Sebastian Kurz urged Europe to maintain its strength and refrain from trying to implement the refugee deal "at any cost".

Former EU Ambassador to Turkey Marc Pierini sees the reason behind Erdogan's actions in a sharp change of his priorities, Deutsche Welle wrote.

"Earlier the Turkish President considered European norms as the main criterion for all his actions, but now the EU is being seen only as an obstacle to the establishment of a presidential republic, and therefore membership in the EU is no longer a strategic goal for Erdogan," Pierini said.

Brussels May Halt Turkey-EU Accession Talks if Death Penalty Reintroduced
Nevertheless, the diplomat still believes that the Turkish leader will continue to abide by the agreement on refugees as long as it is beneficial to both parties.

In mid-March, Brussels and Ankara agreed a deal under which Turkey pledged to take back all undocumented migrants who arrive in the European Union through its territory in exchange for Syrian refugees accommodated in Turkey, on a one-for-one basis. In return, the 28-nation bloc pledged to accelerate the Turkish EU accession bid and introduce a visa-free regime between Turkey and the bloc.

EU Urges Turkey to Follow Human Rights Convention in Punishing Coup Members
Kurz believes that if the agreement falls apart, the EU should assume responsibility for the protection of its own external borders. Earlier the Austrian Foreign Minister summoned the Turkish ambassador in Austria in order to get an explanation for what is currently happening in Turkey. The move came after a wave of demonstrations in support of Turkish President Recep Tayyip Erdogan that took place in Vienna in recent days and lead to the attack on a Kurdish restaurant.

Kurz told reporters that there is "evidence showing that the demonstrations were initiated directly from Turkey."

On July 15, a coup attempt took place in Turkey and was suppressed the following day. Over 240 people were killed and more than 2,000 injured during the failed coup excluding the victims among the coup plotters, according to the country's authorities. Following the attempted coup, many Turks took to the German and Austrian streets to protest the coup and support the Turkish President.