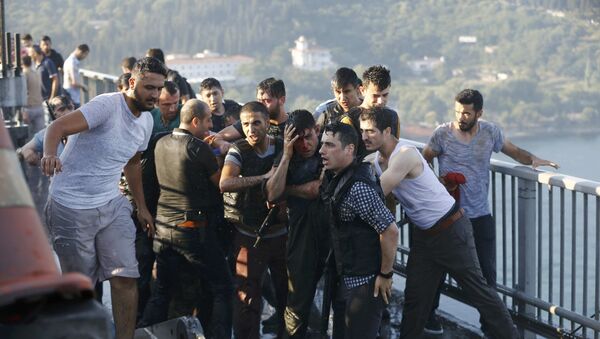 © REUTERS / Murad Sezer
Subscribe
International
India
Africa
The EU foreign ministers urged Turkey on Monday to abide by the norms of the European Convention for the Protection of Human Rights and Fundamental Freedoms, including the abolition of death penalty, when punishing participants of a coup attempt.

Post-Coup Turkey in Danger Unless Erdogan Seeks Consensus Within Country
BRUSSELS (Sputnik) – Late on Friday, Turkish authorities said that an attempted coup was taking place in the country. The coup was suppressed several hours later.

The coup was suppressed several hours later. Soon after the coup attempt, both Turkish President Recep Tayyip Erdogan and Prime Minister Binali Yildirim said that capital punishment could be reinstated in the country.

"The EU underlines the need to respect democracy, human rights and fundamental freedoms and the right of everyone to a fair trial in full compliance with the European Convention for the Protection of Human Rights and Fundamental Freedoms, including Protocol 13 on the abolition of the death penalty," the statement read.

Death penalty was abolished in Turkey in 2004 to bring its legislation in line with the EU standards.

"The EU calls for restraint to be shown by Turkish authorities, including by the police and security forces. All must be done to avoid further violence, to protect lives and to restore calm," the ministers said.