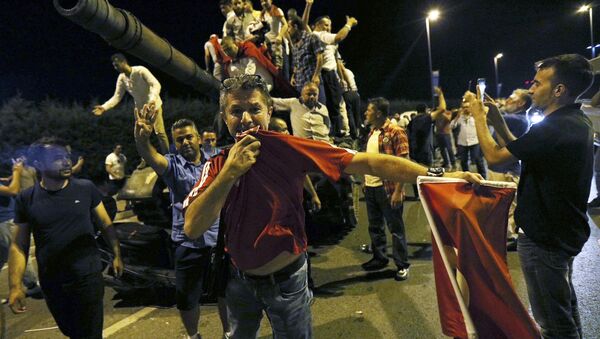 For Western leaders and pro-NATO politicians, "democracy promotion" appears to be a concept that has nothing to do with helping people and all to do with "interests," Irish journalist Bryan MacDonald wrote for RT, pointing to how different the US and its allies reacted to the 2014 Maidan Revolution in Ukraine and the failed July 15 coup in Turkey.

For US, Losing Turkey to Russia is a 'Major Geopolitical Setback'
The differences are indeed radical. In early 2014, Western leaders were pressuring then President Viktor Yanukovych to reconsider his stance on the EU association agreement or resign because he ostensibly refused to listen to what Ukrainians wanted for their country. They insisted that the coup that overthrew him was democracy in its purest form, hailing the Maidan leaders and those the movement brought to power. The fact that Yanukovych was democratically elected was not taken into consideration.

Two years later, when a group of mid-level military and law enforcement officers tried to remove Turkish President Recep Tayyip Erdogan from power, Western leaders rallied behind him, citing democracy and the rule of law as the reason.

This should not come as a surprise, MacDonald argued, since "Western foreign policy has very little to do with spreading freedom and emancipation around the globe. Rather it's about protecting the interests of America and its close allies."

It appears to be so. Yanukovich chose to promote ties with Russia at a time when the West was trying to strengthen its influence in post-Soviet states through greater ties with the European Union and NATO. For his part, Erdogan has long sought to develop a special relationship with the US, something the Bush and the Obama administrations welcomed.

Why the Western Allies Need Erdogan More Than He Needs Them
"Yanukovich's refusal to acquiesce to a, financially very unfavorable, EU association agreement, in favor of closer ties with Moscow," the journalist said, "threatened to tilt the East European balance-of-power against NATO's wishes. Meanwhile, Erdogan, while brutally repressive at home, has maintained Turkey's foreign policy role as America's principal Middle Eastern partner."

In other words, the West needed a more cooperative Kiev and wanted no change in Ankara.

"The American and EU elite has badly exposed itself and it's now time to do away with the charade of 'democracy promotion.' The double-dealing has finally gone too far. As it wasn't already obvious when the cruel totalitarian rulers of Saudi Arabia are greeted as friends but elected leaders like Vladimir Putin and Dilma Rousseff are constantly vilified," MacDonald observed.