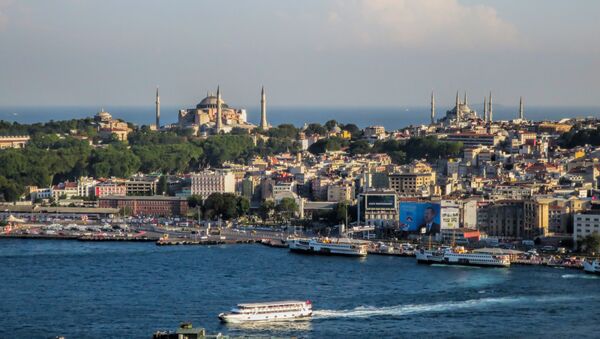 Turkey's increasingly warm relations with Russia spell trouble for the United States at a time when the already strained ties between Ankara and Washington have been further complicated following the unsuccessful attempt to overthrow President Recep Tayyip Erdogan, journalist and research analyst Salman Rafi Sheikh asserted.

Turkish authorities have blamed US-based Islamic cleric Fethullah Gülen for the military coup and have repeatedly asked US officials to extradite him. Washington seems to be reluctant to do this, much to Ankara's discontent.

World
Why the Western Allies Need Erdogan More Than He Needs Them
The rift over Gülen is the latest incident marking what Salman Rafi Sheikh referred to as "Turkey's dramatic shift in foreign policy" away from the West and towards greater cooperation with Russia, Iran and possibly Syria under Bashar al-Assad. Until recently Erdogan viewed al-Assad as an adversary. This appears to be changing.

Turkey's foreign policy shift has been fueled by Erdogan's decision to focus on internal affairs, particularly the country's ailing economy, rather than regional issues.

"Turkey's new policy approach is based on its economic well-being which has been the basis of the weight and influence the country has been enjoying in the Middle East. Its economy had considerably gone down over the past few years and dipped further after its direct involvement in the war in Syria and Iraq," the analyst observed.

As a result, Ankara has reviewed its stance on Russia after a row that was caused by Turkey's decision to shoot down a Russian bomber that was on an anti-Daesh mission in northern Syria. As ties between the two countries normalize, Ankara could greenlight the Turkish Stream project, an initiative that Moscow has championed and Washington opposed.

"For the West, the loss of Turkey to Russia would imply a major geopolitical setback as it would lift the blockade the West has created against Russia's gas supply route to Europe via Ukraine. Washington has been obstructing the construction of a Russian gas pipeline across Turkey to Greece (the so-called Turkish Stream)," the analyst explained.

Turkey No Longer an Obstacle to the US-Russian Cooperation in Syria
The project will help Russia bypass Ukraine, but it offers benefits to Turkey as well. Ankara will be able to fulfil "its own gas needs" if it becomes Russia's "southern hub," Salman Rafi Sheikh observed.

"Reconciliation between them, therefore, suits their vital interests in the region," he said.

Turkey also hopes that Russia could help Ankara to deal with the Kurds. Turkey has long viewed the Kurds as the key threat to the country's integrity and stability and has made every effort to prevent the ethnic group from gaining larger autonomy, let alone independence.

Turkey's new foreign policy will align the country with "the wider regional block being led by Russia on the strategic front and China on the economic front," the analyst said.

"Were this to happen – and it is likely to happen due to the brewing stress between Turkey and the US over Gulen's extradition to Turkey – it will turn out to be a major loss for the US mid-east policy that needs Turkey for its strategy, especially in controlling oil flows of the Middle East, and now its natural gas," he concluded.