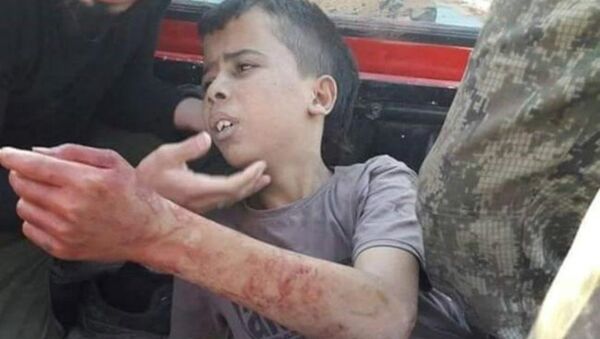 The website Al Masdar News has released a graphic video which shows how the US-backed ‘moderate rebels’ in Aleppo behead a 12-year-old boy they have captured near Handarat Refugee Camp in northern Aleppo. The leadership of the group subsequently called the sickening killing “an individual error”; online users called it a "heinous act".

However, it further pointed that the terrifying footage released by the captors shows the boy wearing ragged clothes, something which can hardly serve as a proof of his cooperation with the brigade.

It seems the #US needs more time to decide if beheading kids is part of its fight for "freedom and democracy" #Syria pic.twitter.com/rhWv62mKm4

​The video shows the boy being decapitated by bearded fighters in the trunk of a pickup car.

Another harrowing video shows a knife-wielding fighter beheading the child, who has been laid down on the trunk with his hand cuffed behind his back.

While shouting 'Allahu Akbar', the executioner holds up the child’s head then put it down on his back.

So excited about the promising democracy @SenJohnMcCain's rebels will establish in #Syria after they behead the kids pic.twitter.com/SuBQa5ipKA

​On Tuesday, the reports emerged that the US cut aid to the Syrian rebel group after becoming aware of the video.

The US State Department promised “consequences” if the gruesome video turns out to be genuine.

“If we can prove indeed what happened and that this group [al-Zinki] was involved in it, it would give us pause about any assistance or frankly any further involvement”, US State Department Deputy Spokesman Mark Toner told reporters at a press briefing today.

​“I can’t take what these consequences would be, but this certainly would give a pause and we’ll look at any affiliation or cooperation with this group,” he reiterated.

The killing was condemned by a number of Syrian residents.

"This is the work of criminals, and is forbidden in Islam," Imam Mohamed Badawi railed against the killing at an Aleppo mosque.

The killing was also condemned by the opposition Syrian National Coalition, which expressed "shock at the horrific scenes" and urged the faction to follow through on its pledge to investigate and punish the perpetrators.

I find no words for this, no excuse, no description. Purported to be #US-backed #Zinki Brigade behead a pow child. https://t.co/EI7oU3zyoN

​"The National Coalition… does not condone any behaviour that is contrary to the principles of the revolution and the aspirations of the Syrian people who came out to demand freedom, dignity and justice," the statement added.

Mohamed Mansour, a resident of Al-Mashhad where the execution occurred has also condemned the killing.

"This is a big error and will harm all the Free Syrian Army rebel factions," he said.

"There is nothing in Islam that allows the slaughter of prisoners. Islam requires captives to be well-treated, fed and cared for."

The sickening beheading also caused outrage in Twitter with many users wondering whether the 'beheading of kids is part of the US fight for freedom and democracy."