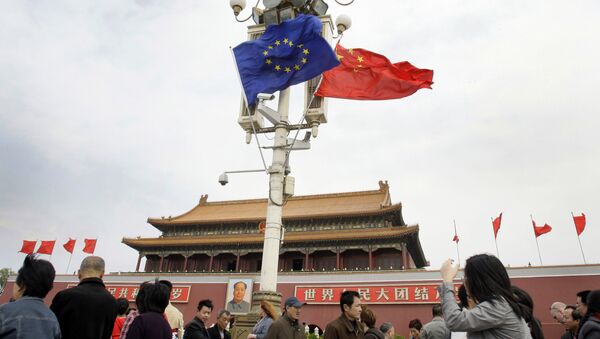 © AP Photo / Andy Wong
Subscribe
Europe should focus on attracting Chinese investments in the IT and telecom spheres, Luigi Gambarella, president of the business-led association ChinaEU, said in an interview with the newspaper China Daily.

EU Denial of China Market Economy Status May Have ‘Very Negative’ Effect
He called on European companies to assess China’s potential in those industries and take advantage of investment cooperation with Beijing.

Gambarella also said that Europe should more actively cooperate with China in digital industries. Many small and medium companies in Europe develop interesting technologies but they need investments.

The interview came two days after Beijing once again called on Brussels to establish rational and transparent conditions for mergers and acquisitions.

In recent years, Chinese companies have been actively buying European assets, including in small and large companies. This sparked concerns among European officials.

A good example is the buzz in Germany about two merger deals proposed by Chinese companies. If a Chinese investor buys the German robot-making giant Kuka for €4.5 billion it would be a record-breaking deal. Chinese investors also want to buy the Frankfurt Hahn airport for €16 million.

In both cases, German politicians have pressured businessmen to scuttle the deal. Finally, Chinese company Midea has agreed to acquire Kuka. Meanwhile, the airport deal has been postponed.

Some countries are concerned about Chinese investments in the sensitive industries of their economy, he said. They fear that this could undermine their competitiveness.

On the other hand, China’s investment activities and trade competition are often seen as "unfair competition," he said.

"However, despite the fact that China and the EU has not yet reached a final investment agreement their investment cooperation is developing. The best way to remove investment barriers is to think about commercial benefits and not to mix business and politics," the expert told Sputnik.

At the same time, the fact that China and the EU do not have an investment agreement creates obstacles for cooperation. The talks have been underway for nearly five years, but little progress has been made.

European companies want more Chinese investments. At the same time, Europe is concerned about Chinese capital in its sensitive industries. This is a natural and insurmountable contradiction, Yakov Berger, an expert at the Institute for Far Eastern Studies, said.

"China is developing too fast and actively buying hi-tech assets abroad. The time when China will dominate the industry is coming. This is the reason for the concerns. Some companies want to attract Chinese investments which are high in demand across the globe. On the other hand, Brussels doesn’t want China to invest much in the European economy. This is a natural and insurmountable contradiction," Berger pointed out.

Showdown: Economic Standoff Between US, China Reaches Acute Phase
The same trend is visible in investment cooperation between China and the United States. Recently, US trade representative Michael Froman in an interview with Bloomberg Television confirmed that the US is interested in Chinese investments.

At the same time, Froman noted that Washington does not like the current Chinese proposals on investing in the strategic Chinese industries.

"It is still a fair distance away from being acceptable to us, but we are going to continue to engage the Chinese and underscore for them the kinds steps that are going to be needed both for the negative list and in terms of what kinds of disciplines we need to put in the text to create a high-standard agreement," he said at an investment banking conference in Sun Valley, Idaho.

In turn, China also wants more equal and fair access for its investments to the sensitive industries of the US economy.

Analysts say that these contradictions would further deepen and would be the central topic for future bargaining between China and the US.