Ahead of the Hague: Beijing Won't Take 'Single Step Back' in S. China Sea

Ahead of an international court ruling on disputed areas in the South China Sea, Chinese state-run media warned the Philippines against escalating tensions, claiming that Beijing won’t “step back” in the ongoing standoff.

US Must See Its 'Days Are Numbered' in South China Sea Row
On July 12, the International Tribunal for the Law of the Sea is scheduled to issue a final decree in a trial initiated by the Philippines against China.

The lawsuit hinges on a “nine-dash line” that Beijing has used to define its territories in the region since the middle of the 20th century. Manila has denounced the claims as having neither historical nor legal grounds, turning to the Hague in 2013 for arbitration. 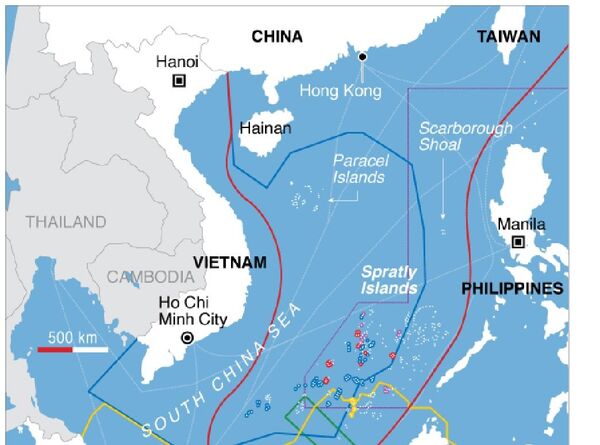 China has refused to participate in the legal process and promised to reject any decision. Beijing has also constructed air strips on artificial islands in waters it considers sovereign territory.

On Friday, the China Daily newspaper issued an editorial that claimed that the Permanent Court of Arbitration (PCA) in the Hague has no jurisdiction in the conflict. The paper labeled the trial a "farce" and said that any upcoming decision will be "illegal, null and void from the outset."

Another state-run Chinese paper, Global Times, went further, stating that Beijing "will fight back" if tensions in the South China Sea keep escalating.

Locked and Loaded? China 'Should Prep for War' Amid Massive Military Drills
"If the US and the Philippines act on impulse and carry out flagrant provocation, China will not take a single step back," the report reads, specifying that Beijing could make “a military outpost" out of Scarborough Shoal in the South China Sea and "sink" Philippine military vessels deployed in the region.

Meanwhile, the United States, a supporter of the Philippines in the row, sent three destroyers to patrol areas in vicinity of Scarborough Shoal and Spratly Islands, according to the Navy Times.

US experts quoted in the report said the deployment is "a deliberate show of force" aimed at China in anticipation of the ruling.

According to Robert Haddick of US Special Operations Command, China has several options to respond militarily, if the Hague rules against them. While their use is viewed as unlikely, Beijing has recently successfully tested its DF-21D anti-ship ballistic missiles, capable of reaching targets in the Philippine Sea.

China also has HQ-9 SAMs and ASCMs missiles deployed in the Spratly Islands, and is currently holding naval drills in the Paracel Islands.

According to the China Daily, Beijing seems to be preparing for a decision that favors its rivals. The paper said Beijing must “be prepared for all eventualities,” stating, "This is not being alarmist, it is being realistic."