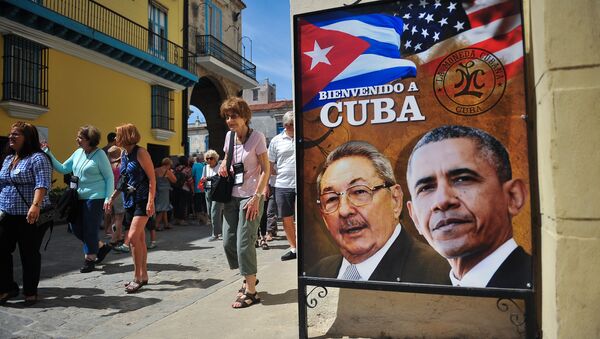 © AFP 2023 / YAMIL LAGE
Subscribe
International
India
Africa
The United States has put forward for consideration eight air carriers to start scheduled flights to Cuba in the fall, the US Department of Transportation announced in a release on Thursday.

World
Russia, Cuba to Sign Deal on Peaceful Use of Nuclear Energy - Moscow

In February, US Transportation Secretary Anthony Foxx and Assistant Secretary of State for Economic and Business Affairs Charles Rivkin signed an arrangement with their Cuban counterparts to resume scheduled air service between the two countries.

US Deployment of Patriot Batteries in Turkey Threatens New Crisis

"Longer term, the arrangement also provides for up to 20 daily roundtrip flights between the US and Havana," the release stated.

President Barack Obama announced in February that regular commercial airline service with Cuba would re-open and reach up to ten international airports on the Caribbean island nation.

In December of 2014, Obama restored diplomatic ties with Cuba, after more than a half century since Washington severed relations with Havana following the 1959 Cuban revolution.