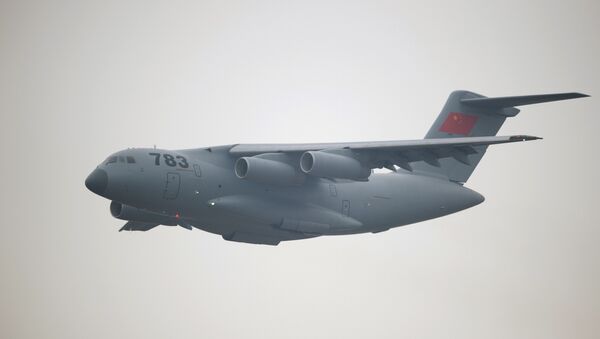 'Chubby Girl': Meet China's Xian Y-20, the World's Largest Military Plane
Designed and manufactured by state-owned aviation giant the Aviation Industry Corporation of China (AVIC), the Y-20 made its first flight in January 2013 and made its debut at the 10th China International Aviation and Aerospace Exhibition in November 2014.

The Y-20 relies on four Russian-made Soloviev D-30 turbofan engines. With a payload of 73 short tons, the aircraft can carry heavy military hardware, including the ZTZ99, China’s largest tank.

The newest Chinese heavy transporter has a length of 47 meters and a wingspan of 45 meters. With a maximum takeoff weight of 220 tons, the freighter can carry a payload of 66 tons. The vehicle can reach a maximum speed of 830 kilometers per hour.

​While its primary function is transport, the Y-20 can also serve as a strategic command center capable of coordinating other aircraft in combat, and can even function as refueling tanker.

Officially codenamed “Kunpeng,” after a Chinese mythical bird that can fly for thousands of kilometers, the Y-20 has got the nickname “Chubby Girl” for its deep and wide fuselage.

Last month, the first two Y-20 planes were delivered to the air force, after five years of design and manufacture as well as another four years of test flights.