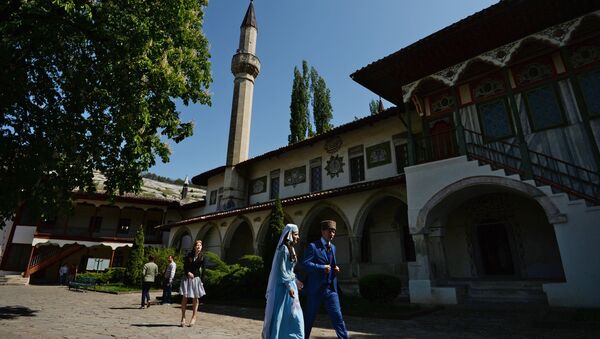 French delegate to the OSCE PA Thierry Mariani said that it was "strange" that Europe was talking about the Crimean Tatars now but did not care about their rights under the Ukrainian government.

Russian Lawmaker Komoyedov Invites France's Le Pen to Navy Day in Crimea
TBILISI (Sputnik) — The resolution on the violations of human rights and fundamental freedoms in Crimea and violations of Crimean Tatars' rights, included in the final Tbilisi Declaration of the Organization for Security and Co-operation in Europe Parliamentary Assembly (OSCE PA), is "hypocritical" and used to spread propaganda, French delegate to the OSCE PA Thierry Mariani told Sputnik on Tuesday.

"The OSCE PA resolution on the violations of rights and freedom in Crimea and the city of Sevastopol that was included into the final declaration is hypocritical. They are worried about the rights of Tatars but they obviously do not care about the Russian minority, for example, in Estonia, other Baltic states where the Russians do not have a right to vote. All of that is just media propaganda," Mariani said.

The French delegate pointed out that it was "strange" that Europe was talking about the Crimean Tatars now but did not care about their rights under the Ukrainian government.

"The Tatars of Crimea are just a tool of propaganda. First of all, we cannot forget that the Tatars in Crimea are a minority, we need to respect the right of the majority and the majority of the Crimean citizens want to be a part of Russia," Mariani said.

Euronews Cautions Journalist for Mistake in Story on Crimean Tatars
Crimean Tatars are a Turkic ethnic group that currently accounts for an estimated 13 percent — or about 260,000 people — of the Crimean population. Crimean Tatars were forcefully deported by the Soviet authorities to Central Asia during World War II. After Crimea decided to secede from Ukraine and reunify with Russia in March 2014, Russian President Vladimir Putin signed a decree rehabilitating ethnic minorities that suffered under the rule of Soviet leader Joseph Stalin, including Crimean Tatars.

Earlier in the day, the 25th OSCE PA annual session concluded with the adoption of the 2016 Tbilisi Declaration which focuses on security, migration and human rights issues. It includes resolutions proposed by different delegations, include that suggested by Russia calling on the OSCE PA to stress the need to equip passenger aircraft with additional technical means of monitoring conditions on board in real time.