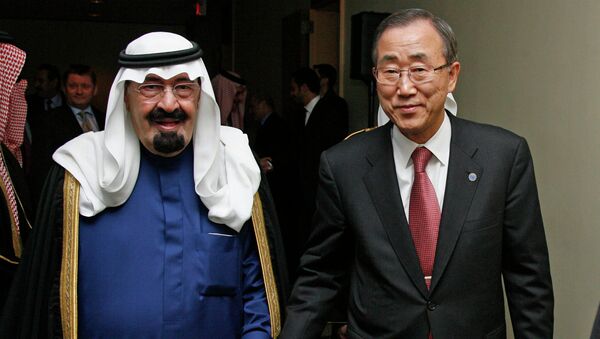 On Wednesday, Amnesty International and Human Rights Watch released joint statements calling on the United Nations General Assembly to suspend Saudi Arabia from the UN Human Rights Council until Riyadh ends its military campaign in Yemen. Reports indicate that the operation has led to indiscriminate violence against children and civilians, with several school houses and hospitals coming under fire from Saudi-backed forces.

The lobbying effort to oust Saudi Arabia from its role on the Human Rights Council comes in the wake of a recent controversy surrounding war crimes committed by Saudi-led forces, as was initially documented by UN researchers.

On June 2, the United Nations added Saudi Arabia to the "child killers backlist" as part of its annual Children and Armed Conflict (CAAC) report. Only four days later, UN Secretary General Ban Ki-moon announced that Riyadh would be removed from the list pending further investigation of the report’s claims.

In an attempt to blunt the controversy surrounding the decision, Ban Ki-moon declared that the redaction was temporary measure meant to ensure the report’s accuracy. The Saudi government, however, contradicted this statement by insisting the removal was permanent.

Several days later, the UN chief went public about the circumstances surrounding his decision, hinting that Riyadh had used extortion to secure the result.

"The report describes horrors no child should have to face, but at the same time, I also had to consider the very real prospect that millions of other children would suffer grievously if, as was suggested to me, countries would defund UN programs," Ban Ki-moon said. "Children already at risk is Palestine, South Sudan, Syria, Yemen and so many other places would fall further into despair."

Specifically, the report established in intricate detail that 60% of the 785 child deaths and 1,168 child injuries documented throughout the conflict were directly attributable to Riyadh’s bombing attacks. Furthermore, these raids appeared to intentionally target civilian populations.

It was later reported that the UN Secretary General was, in fact, blackmailed by none other than Saudi Foreign Minister Adel al-Jubeir, who informed the United Nations that if the truth about Riyadh’s crimes against the children of Yemen was revealed,  Riyadh would move to eliminate nearly $500 million in funding for UN programs, with a promise to coordinate defunding efforts with Arab allies.

In addition to direct casualties, the bombing campaign has created a health crisis. Nearly 10,000 youth deaths, all under five years of age, in the past year were caused by preventable illnesses, according to the United Nations report. This is partially blamed on the destruction of critical components of Yemen’s infrastructure and the limited ability of aid workers to get to those in need.

Save the Children also reported in March that over 90% of Yemeni children required emergency humanitarian aid as a result of the Saudi-led devastation in Yemen.

Despite the wanton disregard for the lives of children and civilians, Saudi Arabia will likely remain on the Human Rights Council, as it would require a two-third majority vote by the 193-member UN General Assembly to suspend Riyadh from the post.