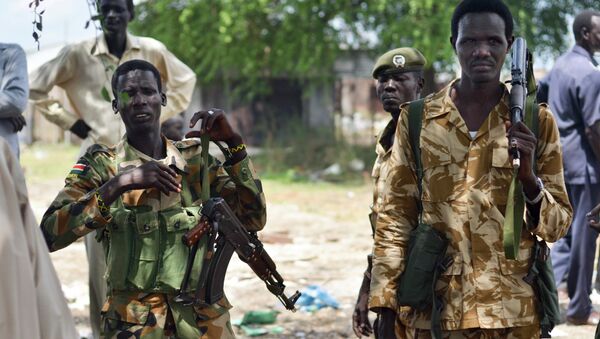 UNITED NATIONS (Sputnik) — The United Nations Mission in South Sudan (UNMISS) is currently deploying additional forces to the area, according to the statement.

“The Secretary-General is deeply concerned about the current escalation of violence between the Sudan's People Liberation Army (SPLA) and armed groups, in Wau town and surrounding areas, in South Sudan. He regrets the reported loss of lives.”

World
On South Sudanese Child Soldiers, Clinton Lands on Both Sides of the Issue

Earlier on Saturday, South Sudanese media reported that the SPLA clashed with an unnamed armed group in the south of Wau and some other areas. Heavy weaponry, including tanks, has been deployed, with people fleeing violence under UN protection. Violence reportedly subsided later in the day.

“The Secretary-General calls on all fighting forces to immediately suspend the hostilities, provide access to the United Nations Mission in South Sudan (UNMISS) and cooperate with humanitarian partners to facilitate the delivery of assistance.”

Civil war broke out in South Sudan in late 2013 between the country's government and opposition forces after President Salva Kiir Mayardit accused opposition leaders Riek Machar and Pagan Amum of planning a coup. Tensions between the Dinka and Nuer ethnic factions in the Presidential Guard escalated into hostilities in the nation’s capital, Juba, before spilling over to other areas.

Over 10,000 people had died by early 2015 as a result of the fighting, according to the Armed Conflict Location & Event Data Project. Almost two million civilians had been displaced by mid-2015, according to the United Nations.