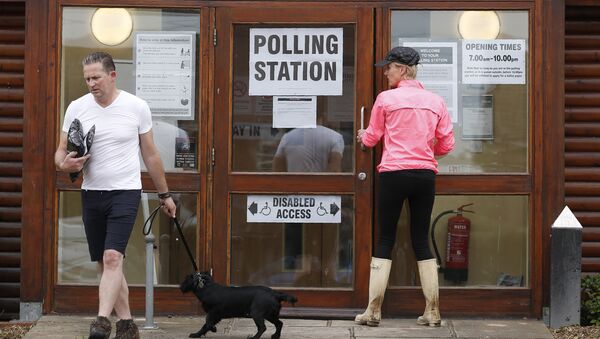 The EU referendum has not only driven the UK crazy it has also seen the emergence of some of the strangest hashtags trending on social media.

Here are a few that have been tweeted or shared throughout the day.

Users have been posting pictures of their dogs at polling stations, some even show the pooches dressed up in extravagant outfits, all of them getting ready for the controversial and highly debated vote. The EU referendum may have caused us to frown, but one can agree, these pups have certainly put a smile on our faces again.

"In, out, in out, you shake it all about," goes the popular children's tune. The hashtags only goes to prove that the British sense of humor has not died. Despite the bad weather and a campaign that seemed to last a lifetime, the public have kept joking. Will we be in or out of the EU tomorrow? Who knows, but one thing's for sure, the Hokey Cokey will remain timeless whatever the outcome.

Disappointed there wasn't an option to "shake it all about":(#iVoted #hokeycokey

People of Britain: I love you so much for the fact #voteymcvoteface is trending. Carry on:):) ♥♥♥

Probably the most politically "serious" of them all, this hashtag has taken over social media, warning against the use of pencils and urging voters to use a pen instead, to prevent — them (whoever they are) — rubbing out and changing your vote.

Now with this hashtag, Twitter users are trying to make the public aware that they should not believe the myth that pens are not allowed in polling booths.