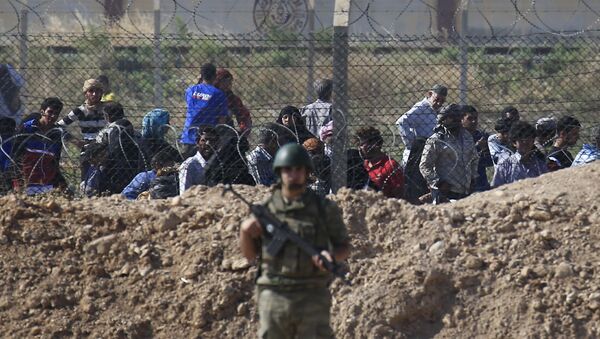 © AP Photo / Lefteris Pitarakis
Subscribe
International
India
Africa
A group of MPs from Turkey’s opposition Republican People’s Party has published a report, which describes the plight of refugees living in Turkey and proposes ways of solving this problem.

“It is hard to be a refugee in Turkey, but being a non-Muslim refugee is twice as hard,” says the report, titled “From a Humanitarian Catastrophe on the Border to an Exam on Being Human.”

According to the authors, there are an estimated 45,000 non-Muslim refugees from Iraq and Syria currently living in Turkey. Most of them are Assyrians, Armenians, Yezidis and Chaldeans.

Refugees in Turkey: Cases of Slavery, Rape ‘Go Unnoticed by Officials’
After meeting with Armenian refugees from Iraq living in Yozgat, the authors write that, forced to flee to Turkey for fear of being massacred by Daesh terrorists, the Armenians still live in fear of jihadists who freely operate in Turkey.

“Non-Muslim refugees have to hide their ethnic and religious identity. The Armenians in Yozgat speak their native language at home but have to switch to Arabic in public places and pose as Arabs just to be on the safe side,” the report says.

It also says that non-Muslims are either unable to exercise their religion or have to do it in secret.

Contrary to popular belief, Western countries give no preference to Christian refugees with some of these forced migrants having to wait until 2023 to have their asylum applications considered.

Non-Muslim refugees living in Turkey find it extremely hard to find a job and even if they do they are forced to work for peanuts.

They also have little if any access to medical services and need special permission to leave town.

In an interview with Sputnik Selina Doğan, an ethnic Armenian RPP deputy from Istanbul, shared her impression of a visit to Yozgat.

“Yozgat is a very conservative town. Out in the street the Armenians have to speak Arabic because they fear provocations by the locals. Only a handful of them have been able to find a job, and even they receive meager pay,” Selina Doğan said.

“While in Turkey they appealed to the UN to let them move to Canada only to be told that their request would not be   considered before 2022.”

When asked why non-Muslim refugees had wound up in a place known for its stringent Muslim traditions, Selina Doğan said after refugees are registered in Turkey it is up to local administrations to decide where to settle them.

Arriving at their designated place of residence, the refugees are not allowed to leave without special permission. Moreover, they are supposed to regularly report to police.

“The authorizes ignore all these problems because otherwise they wouldn’t have settled Christian refugees in Yozgat where they are unable to exercise their religion and bury their near and dear according to Christian funerary customs.

According to migration experts, even if peace eventually returns to the countries the migrants came from, up to 70 percent of them will never get back because some 150,000 children have already been born in Turkish refugee camps and about 450,000 elsewhere in the country.

“These kids learn Turkish before their do their mother tongue, and they see Turkey as their home country. That’s why we must treat them as our own,” Selina Doğan emphasized.