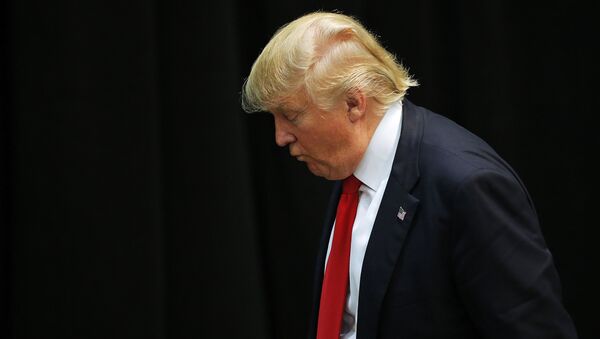 © REUTERS / Chris Keane
Subscribe
International
India
Africa
A lawsuit filed on Monday accuses presumed Republican presidential nominee Donald Trump of the rape of a 13-year-old girl at a party in 1994.

Named in the lawsuit alongside Trump is registered sex offender Jeffrey Epstein, whose private jet was casually named by some the “Lolita Express.” The unnamed plaintiff alleges that the rape occurred at a party at Epstein’s mansion, and claims that, following the incident with Trump, Epstein also raped her.

This is the woman’s second attempt at filing a lawsuit. She had previously filed a suit against Trump in April, but the case was dismissed over paperwork errors. In the April lawsuit, her listed address was an abandoned building in California.

The woman alleges that he threatened her life as well as the lives of her relatives.

“Immediately following this rape, Defendant Trump threatened Plaintiff that, were she ever to reveal any of the details of the sexual and physical abuse of her by Defendant Trump, Plaintiff and her family would be physically harmed if not killed.”

She claimed that Epstein became violent when he learned that Trump took her virginity, instead of him.

The unnamed plaintiff alleges that Epstein also threatened her and her family. She is arguing that the statute of limitations should be lifted due to the threats she allegedly received.

Her previous lawsuit claimed that she was subjected to sexual assaults on multiple occasions, including once when she was “was forced to engage in an unnatural lesbian sex act,” with a 12-year-old “sex slave.”

Along with the complaint was another affidavit, signed by a woman using the alias “Tiffany Doe,” who claims to have worked as a “party planner” for Epstein.

The affidavit claims that she was “was hired by and paid directly by Mr. Epstein from the years of 1991-2000 to attract adolescent women to attend these parties, most of which were held at what is known as the Wexner Mansion.”

She also alleged that threats were made against her and her family.

“After leaving the employment of Mr. Epstein in the year 2000,” she wrote, “I was personally threatened by Mr. Epstein that I would be killed and my family killed as well if I ever disclosed any of the physical and sexual abuse of minor females that I had personally witnessed by Mr. Epstein or any of his guests.”

Following the initial filing in California earlier this year, Trump denied the allegations.