Is Washington Ready to Recognize China as Another 'Great Power'? 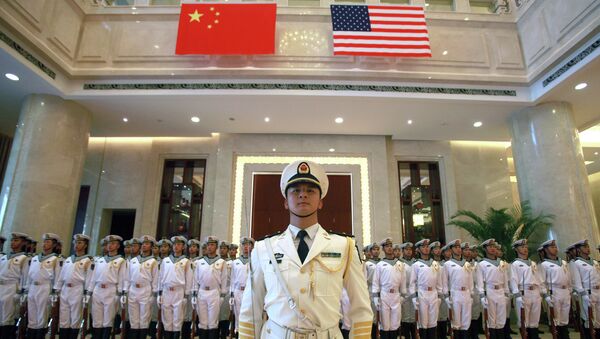 As connections between Beijing and Washington continue to increase, each side "must take an effort" to accommodate the customs of the other in order to evade "thorny disagreements, or worse," US military expert Ben Lowsen writes.

Regardless of the tensions that continue to simmer over the South China Sea, Washington has seemingly softened its stance towards Beijing; experts believe that such a shift could be explained by an upcoming change of leadership both in the United States and China.

An opinion piece written by former Assistant US Army Attache in Beijing Ben Lowsen for The Diplomat is yet another example of the apparent thaw in relations between the countries.

"Modern China's emergence onto the global stage brings with it both concern and hope: concern for how the world will accommodate an emerging great power and hope that a great civilization will enrich every aspect of global exchange," Lowsen writes.

Why Washington is Unlikely to Make Waves in South China Sea in Near Future
"The world is looking to the United States as the cornerstone of the existing international system for leadership as it negotiates its relationship with an independently-minded China. Against this backdrop, it is now more important than ever that the United States and China better understand one another, particularly in the realm of security and military affairs around key regional issues," the military expert emphasizes.

He provides a stark contrast to US Secretary of Defense Ashton Carter's previous remarks about China's "expansionism" and the notion voiced by Roger Cliff of the Atlantic Council that Washington should deal with Beijing "from a position of strength [rather] than from a position of parity."

Lowsen's stance is especially remarkable against a background of ongoing tensions between China and the United States over the South China Sea.

"Unless the two countries appreciate the similarities and differences in their military cultures, traditions and norms, the ongoing dialogues between them will never fully realize their potential," the American military expert continues, presenting a detailed review of the US and China's institutional and interpersonal military culture and norms of behavior.

Pacific Powder Keg: US Deploys More Ships Raising Stakes in South China Sea
One might argue that Lowsen's article was just timed for the beginning of the US-led international Rim of the Pacific (RIMPAC) exercises near Hawaii. The drills are due to begin on June 30, bringing together almost 27 nations, including China.

On Wednesday, Chinese fleet participating in RIMPAC "departed from a military port in Zhoushan City in east China's Zhejiang Province," according to Xinhua.

Commenting on the matter, China's Deputy Navy Commander Wang Hai highlighted the mission's importance for the "new type of major power relationship" between China and the United States, Xinhua added.

Why Russia is Uniquely Positioned to 'Mediate' Disputes in S China Sea
Lowsen's report is not the only "reverence" for Beijing.

Dr. Euan Graham, Director of the International Security Program at the Lowy Institute in Australia, called attention to the fact that both US Defense Secretary Ashton Carter and Admiral Harry Harris of US Pacific Command — well-known for their belligerent stance — were unusually "tolerant" toward Beijing during the latest 15th Shangri-la Dialogue defense summit.

Graham suggested that the truth of the matter was that the defense summit nearly coincided with the US-China top level negotiations in early June in Beijing.

At the same time, Felicia Schwartz and Mark Magnier of the Wall Street Journal pointed out that "this year's meeting of the Strategic and Economic Dialogue is the last for the Obama administration, with the US presidential election approaching." Likewise, "China… will face its own important leadership transition" in 2017.

On the one hand, there is certain uncertainty about the prospects of US-China relations in both Washington and Beijing. On the other hand, neither of the countries want to make waves amid the aforementioned "leadership transition."

"As contact between China and the United States continues to grow in frequency and importance, each side must make an effort to understand and accommodate the customs of the other while maintaining their own traditions… This creates the type of understanding and fellowship that can prevent simple misunderstandings from escalating into thorny disagreements or worse," Lowsen stresses.