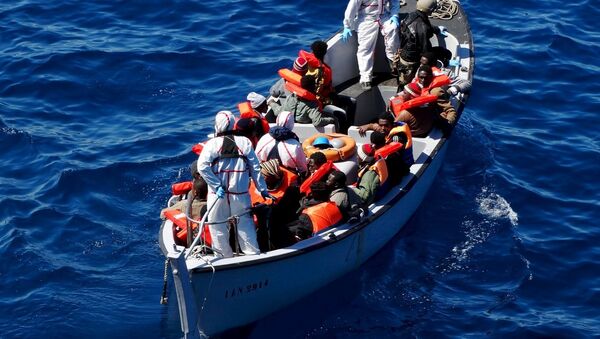 © REUTERS / Marina Militare/
Subscribe
Members of the European Parliament have poured scorn over the latest European Commission proposal to pay Middle East and African countries to receive returned migrants from Europe, saying the deal is a "copy-paste" of the controversial EU-Turkey migrant deal.

Turkey Not Considering Abandoning Refugee Deal With EU - Deputy PM
The European Commission has set lout a new "migration partnership framework" designed to stem the flow of migrants making the perilous journey across the Mediterranean and Aegean seas by encouraging migrants to remain nearer their homes.

The deal includes giving financial and other support to countries in an effort to "break the business model of people smugglers."

The deal is similar to the controversial EU-Turkey deal, under which the EU is paying Turkey US$6.8 billion over two years to accept "irregular migrants" — those denied asylum — from Greece, in return for Syrian refugees being relocated from Turkey to the EU.

​Former Belgian Prime Minister and Alliance of Liberals and Democrats for Europe (ALDE) group leader Guy Verhofstadt said: "In my eyes, the Migration Compact it is nothing more than a copy-paste of the Turkey deal with new countries: Jordan, Lebanon, Libya, Tunisia. Later to sub-Sahara countries. This not so new approach is very simple: we say to them: we give you money, if you don't send us refugees."

"The EU-Turkey statement is a dead end policy and this needs to be recognized by the commission, rather than trying to impose this model also in other parts of our neighborhood. It would be a deeply worrying development if the Commission and EU Member States sought to embark on a path towards a type of 'Australian' migration model for the EU."

However, the Commission says the priorities are saving lives at sea, increasing returns, enabling migrants and refugees to stay closer to home and, in the long term, helping third countries' development in order to address root causes of irregular migration. In a statement, the Commission said: "Member State contributions in these partnerships — diplomatic, technical and financial — will be of fundamental importance in delivering results."

It’s true our problem is mainly solved by #EUturkey kind of deals. But for #refugees, this deal is a drama.

"Copying the Turkey deal and continuing to outsource our problems is not the way forward. What we propose is to replace this so-called 'Migrant Compact' with 'new partnership agreements,' a type of partnership where we build co-operation with transit countries, built on three key elements."