Traveling in Style: A Look at Vladimir Putin’s Many Modes of Transportation 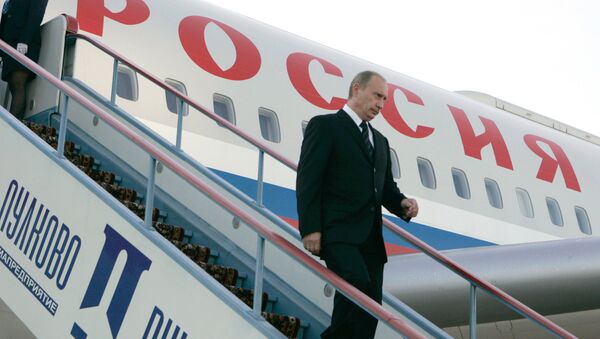 © Sputnik / Dmitry Astakhov
/
Go to the photo bank
Subscribe
Russian President Vladimir Putin has a hyper-busy schedule in the coming days, but his movement will not deter the traffic in the capital and will not create problems for drivers as Putin has his own method of transportation.

The Russian President prefers to fly by helicopter than travel by car and he has been using this type of transport actively for several years now, sometimes leaving armored limousines in his garage.

Vladimir Putin prefers Russian made technology and that is why he flies exclusively on Russian Mi-8. Noticing the president’s interest in the helicopter, holding ‘Helicopters of Russia’ decided to develop a new improved version of the Mi with a better-quality interior for a more comfortable journey.

The layout of the new VIP cabin was demonstrated to Putin a few years ago. The improved Mi-8 is sound proof; it has leather armchairs and a sofa, mood lighting, a huge TV and all kinds of home appliances — from refrigerators to coffeemakers. 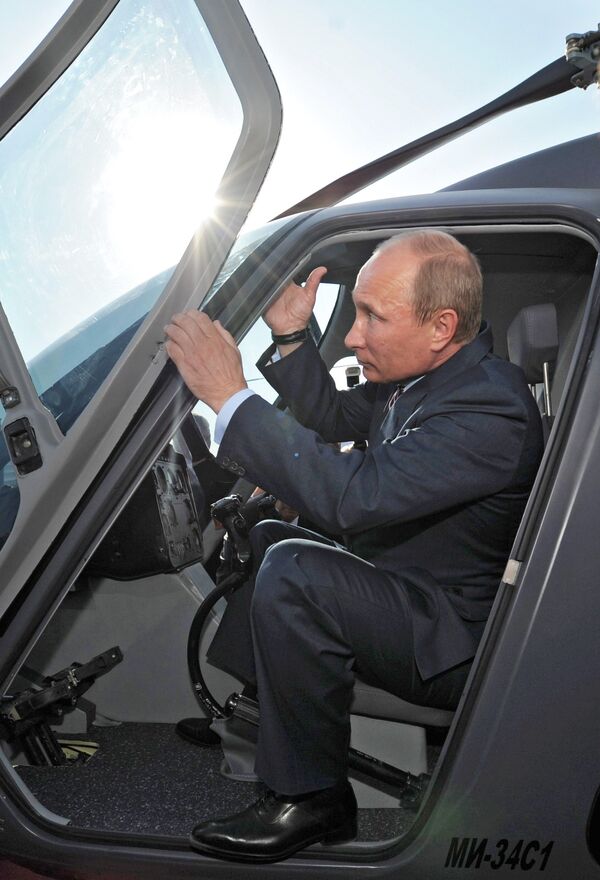 During last year’s International Aviation and Space Salon MAKS, the Russian President examined a ready-made mockup of the helicopter and even invited the prince of the United Arab Emirates to take a look. It seems that there must be something inside it that will surprise the monarch who is undoubtedly used to luxuries himself.

On the ground, Vladimir Putin travels around in a Mercedes-Benz S600 Pullman. There are 11 such vehicles registered in the Federal Security Service.

In total there are 48 Mercedes-Benz S600 in the treasury of the Federal Security Service. Each car costs somewhere between 6 million to 64 million rubles with four cars set at a price more expensive than 60 million rubles. 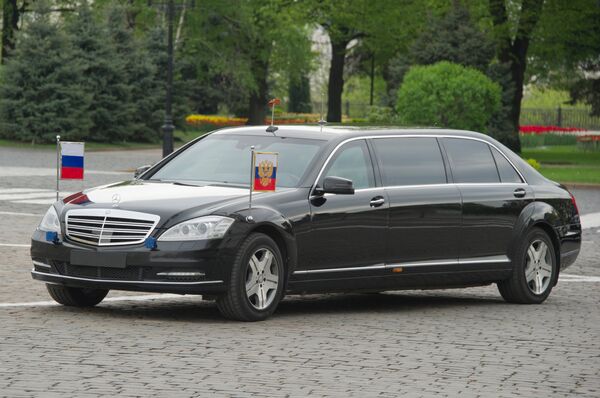 Putin did not only ride in limousines, but also in minibuses. As a president, he dramatically increased the number of visits across the country. Therefore special minivans were manufactured with special protection body with 8-10 seats, which can comfortably accommodate him and his entourage.

Being the driver of top politicians is no light matter. The applicant has to pass a serious psycho-physiological test and training to drive in extreme conditions.

In addition, the driver has to have worked in the operational division of the FSO. Only after that can one apply to be the president or prime minister’s driver.

The president has more than ten drivers. All of them are high-class professionals, but even then they train once a week. The trainings include mandatory shooting while driving, driving in conditions which simulate ice, driving through water barriers and explosions.

They say that after each such training the drivers lose around several pounds. Their working day begins with a medical examination, instructions and analysis of recent accidents in Moscow.

The presidential motorcade is transported by a special cargo squad aboard ‘Rossiya’ aeroplanes. During a visit to Vienna in June 2014, the Russian President Procession consisted of 27 cars and 10 motorcycles — mostly Austrian police.

The cars that definitely belonged to the Russian President included a limousine and several minibuses with alarm systems. The city officials did not block the traffic but asked the oncoming traffic to stay to the right.

For security reasons during presidential trips across Russia the license plate is not placed on the front of the vehicle. 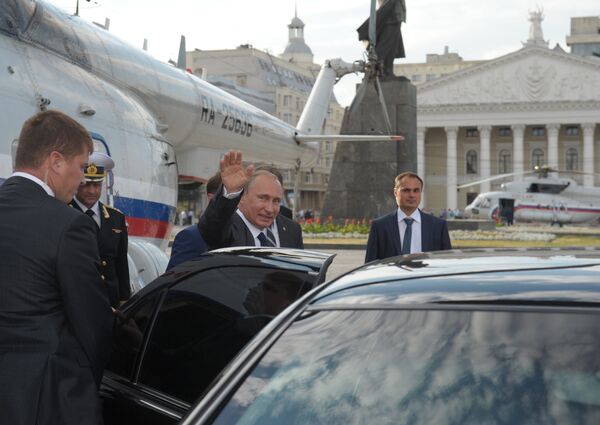 President Vladimir Putin (second right) gets into a car in Voronezh. (File)
© Sputnik / Alexei Druzhinin
/
Go to the photo bank

As a result, when several identical vehicles pass by, the onlooker cannot tell them apart. The back room is needed for guiding the security personnel. This tradition has been in place since the time of Joseph Stalin. During foreign trips much depends on how the host country is willing to receive the delegation.

At the end of 2017, the presidential garage will receive new cars from the ‘Cortege’ project. This means that the audience will see the newest addition most likely during the next presidential inauguration.

The Cortege project is being created on the orders of the government since 2013. On the basis of a single platform, developed by the Moscow Scientific Research Automobile and Engine Institute, it is planned to start commercial production of limousines and sedans, SUVs and minivans.

According to the plan a wealthy buyer will be able to buy the same car as the president, although it will have less security features.

By 2020, it is expected that 4-5 thousand cars will be produced under the Cortege project. In 2015, the budget allocation for the project amounted to 3.6 billion rubles, in 2016 another 3.7 billion were added.

In Air and Underwater:

The Russian fleet includes Il-96-300 and Tu-214 planes. The Sukhoi Super jet 100 is set to join the fleet soon. The squad also has a flying point of control — this aircraft is equipped with special communications systems, allowing the president to negotiate and manage the nuclear forces of Russia in encrypted mode.

All departures of these aircraft are made from the Vnukovo-2 government airport.

The main presidential plane is a much modified version of the Il-96 passenger. In flight, the head of state can contact any agency, institution and conduct international calls or conference calls.

Vladimir Putin can move about not only in the air but on water as well. The President has two yachts, three ships, seven boats and one sailing catamaran. This unusual means of transport used by the President is provided to him by other organizations. 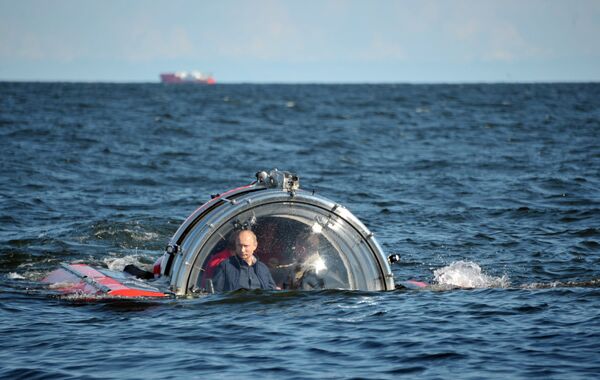 Russian President Vladimir Putin following a dive in a Sea Explorer 5 submersible to the sunken screw-driven sailing ship Oleg in the Bay of Finland which sank in 1869. (File)
© Sputnik / Aleksey Nikolskyi
/
Go to the photo bank

For example, the bathyscaphe which Putin used to inspect sunken Byzantine ship at the bottom of the Black Sea belonged to the Russian Geographical Society.

000000
Popular comments
goldcamshaft, I agree. I'm the same way with certain people I know. I tell them to do what they want because I know they have worked it out in their head and have a history of great results. No need to change a recipe that already works.
jas
5 June 2016, 23:32 GMT1
000000
Newsfeed
0
New firstOld first
loader
LIVE
Заголовок открываемого материала
Access to the chat has been blocked for violating the rules . You will be able to participate again through:∞. If you do not agree with the blocking, please use the feedback form
The discussion is closed. You can participate in the discussion within 24 hours after the publication of the article.
To participate in the discussion
log in or register
loader
Chats
Заголовок открываемого материала
Worldwide
InternationalEnglishEnglishMundoEspañolSpanish
Europe
DeutschlandDeutschGermanFranceFrançaisFrenchΕλλάδαΕλληνικάGreekItaliaItalianoItalianČeská republikaČeštinaCzechPolskaPolskiPolishСрбиjаСрпскиSerbianLatvijaLatviešuLatvianLietuvaLietuviųLithuanianMoldovaMoldoveneascăMoldavianБеларусьБеларускiBelarusian
Transcaucasia
ԱրմենիաՀայերենArmenianАҧсныАҧсышәалаAbkhazХуссар ИрыстонИронауОssetianსაქართველოქართულიGeorgianAzərbaycanАzərbaycancaAzerbaijani
Middle East
Sputnik عربيArabicArabicTürkiyeTürkçeTurkishSputnik ایرانPersianPersianSputnik افغانستانDariDari
Central Asia
ҚазақстанҚазақ тіліKazakhКыргызстанКыргызчаKyrgyzOʻzbekistonЎзбекчаUzbekТоҷикистонТоҷикӣTajik
East & Southeast Asia
Việt NamTiếng ViệtVietnamese日本日本語Japanese中国中文Chinese
South America
BrasilPortuguêsPortuguese
NewsfeedBreaking
17:14 GMTPope Francis Stumbles on Airstair as He Boards Plane in Greece
17:02 GMTTrump’s Social Media Listing Vehicle Says Under Inquiry From US Securities Investigators
16:47 GMTRussia, Egypt Start Naval Phase of 'Bridge of Friendship-2021' Drills in Mediterranean
16:40 GMTUS Reportedly Mulls Cutting Russia Off SWIFT, Sanctioning Energy Producers & 'Putin's Inner Circle'
16:37 GMTFinland’s PM Parties at Nightclub Until 4am After Contact With COVID-Positive Official
16:14 GMTSecond Week of Ghislaine Maxwell Sex Scandal Trial Kicks Off
15:56 GMTBoost for Britain! Is the UK’s COVID-19 Third Jab Campaign Saving Lives?
15:55 GMTWestminster Preparing 10-Year War on Drugs in Attempt to Defeat County Line Gangs
15:44 GMTIsrael Will Reportedly Push US to Strike Iranian Facility Amid Lack of Progress in Vienna Talks
15:41 GMTAmerica Unveils First-Ever Strategy to Battle Corruption at Home and Abroad
15:30 GMTChina May Build Military Base in Equatorial Guinea Amid Beijing’s Tensions With Washington
15:15 GMTKremlin: Putin Will Listen to Biden's Proposals on Ukraine 'With Great Interest'
15:15 GMTNYC to Use 'Preemptive Strike' Against Omicron With Vaccine Mandate for all Businesses, Mayor Says
15:08 GMT3,000 Security Officers Guard India's Mathura as Hindu Group Threatens to Install Idol in Mosque
14:59 GMTAmid Rumours of US Boycott of Beijing Olympics, How Could the Move Affect the Games?
14:52 GMTUK Policing Minister Not Surprised Over Reports of Drug Use in Parliament Building
14:45 GMTLabour Unions Protest in Brussels Against Low Wages, Expensive Electricity - Photos
14:26 GMTSpanish Court Rules Employee Can be Fired for Job Abandonment During Pandemic - Reports
14:18 GMTAnger and Shock After Intruders Vomit and Urinate at Site of Manchester Arena Bombing Memorial
14:15 GMTUS, UK, Canada Concerned by Tigrayans Arrested Without Charge in Ethiopia