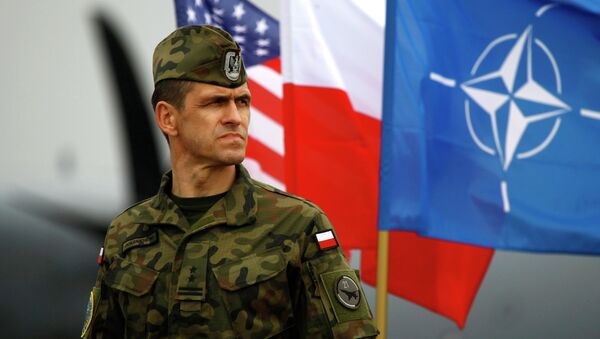 Commenting on the recent announcement of the Polish Defense minister that a single NATO battalion inside Poland would be enough to “deter Russian aggression,” political analyst Ivan Konovalov said that Warsaw has a certain strategy regarding NATO and is skillfully playing it out.

US Uses Phantom 'Russian Threat' as 'Chain Around Europe's Neck'
Polish Defence Minister Antoni Macierewicz has claimed that a single NATO battalion inside Poland would be enough to deter the so-called “Russian aggression.”

Although NATO units in the Baltics would not be able to defeat Russia in case of an invasion, they could slow down the attack while waiting for reinforcements, Macierewicz said in the interview with Defence News website.

Meanwhile, the website quotes NATO Secretary General Jens Stoltenberg, who came on a visit to Poland ahead of the upcoming NATO Summit in Warsaw, as pledging support for putting troops on Polish soil, saying “let me be clear: There will be more NATO troops in Poland after the Warsaw summit (July 8-9).”

Commenting on these announcements, political analyst Ivan Konovalov told Radio Sputnik that Poland has a clear strategy with regards to NATO which it is playing very skillfully.

“The core of this strategy is to become the US’s major ally in Eastern Europe,” Konovalov, director of the Center for Analysis of Strategies and Technologies, told Radio Sputnik.

'It's Time to Leave NATO Now!' Europeans Launch New Anti-War Campaign
He further explained that for Poland, it is a good foreign policy leverage to solve a number of issues. In addition, it means allocation of additional funds.

Meanwhile, he added, other NATO European member states are forced to increase their military budgets with the Baltic States topping the list.

“In due time, they were joining NATO with the purpose of reducing their military expenses and, under coverage of the Alliance to focus more on economics rather than the development of thier own military forces,” Konovalov explained.

However NATO insisted that all its member states should allocate 2 per cent of their budget for military purposes, which they are trying to do, “with moans and groans,” he added.

Meanwhile, Moscow repeatedly said that the actions of the US and NATO in deploying a missile defense system in Europe pose a certain threat to regional security as well as Russia’s national security and could undermine the strategic stability in the region.

Polish Defense Minister: One NATO Battalion Can Stop 'Russian Aggression'
The Russian side noted more than once that the missile defense system in Eastern Europe is part of the US nuclear strategic potential stockpiled on the periphery.

The deployment of such systems violates the Intermediate-Range Nuclear Forces Treaty (INF Treaty) and Moscow will be forced to take responsive measures to ensure its security.

“When we ask them directly, who are you going to deter, NATO representatives and western experts grin, get uneasy and say nothing,” Konovalov said.

Even they understand that their actions are provocative towards Russia, he said. And Russia is forced to respond through the deployment of additional units which heightens tensions in the relationship between Russia and the West.

However, NATO continues to build up on Russia’s borders, he notes.