US Uses Phantom 'Russian Threat' as 'Chain Around Europe's Neck' 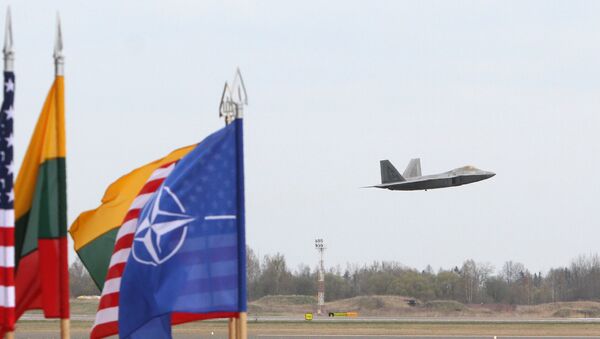 The rise in defense spending among NATO states in Europe, motivated by an imaginary “Russian threat”, is a consolidating idea for Eastern Europe, which brings sense not only to the concept that Eastern Europe is part of the European Union, but to the whole idea of the EU, according to Valery Korovin, director of the Center for Geopolitical Studies.

NATO Parliament Has 'No Choice': More Troops to Eastern Europe, Yet Again
“This brings at least some sense not only to the concept that Eastern Europe is part of the European Union, but to the whole idea of the EU,” Korovin told the Russian media, in reference to the recent comments by NATO Secretary-General Jens Stoltenberg regarding the planned rise in defense spending among European countries which are members of NATO, for the first time in nearly a decade, due to fear over the so-called “Russian aggression” and the migrant crisis in the Mediterranean.

“Europe has reached a conceptual and civilizational dead end,” Korovin added. “It is 'diluted' and has no idea in which direction it should progress further.”

The political analyst further suggested that Europe does not have any consolidating idea, what he called an “assemblage point”.

Therefore, he added, Washington proposed Russophobia and fear over so-called “Russian aggression” as a “mobilizing idea for European society.”

The US is pursuing a certain goal to “tie up” Europe to itself.

“This is an artificial idea, created by the US for the purpose of 'tying up' Europe to itself, bringing it to its knees and putting a chain around Europe's neck."

Polish Defense Minister Says NATO to Deploy 4 Battalions in Baltic States
And in order to reach this goal, Washington is “playing out” this "Russian threat”, “Russian danger” and “Russian return cards”.

Earlier on Monday, The Financial Times published an interview with NATO Secretary-General Jens Stoltenberg, where he said that defense spending among Europe’s NATO states is set to rise for the first time in nearly a decade due to fears over so-called “Russian aggression” and the migrant crisis in the Mediterranean.

“The forecast for 2016, based on figures from allied nations, indicates that 2016 will be the first year with increased defense spending among European allies for the first time in many, many years,” Stoltenberg told the newspaper.