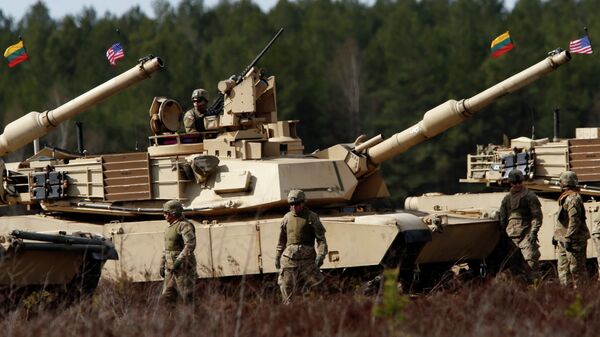 War is a profitable business, they say, - so much so, it seems, that the US has placed it at the heart of its economy. This is why US politicians and military officials have claimed that Russia poses a threat to their nation and its allies, analyst Finian Cunningham asserted, adding that Washington's only real enemy is peace.

Just take a look at the US' discretionary spending, he urged. In 2015, the US military budget (nearly $600 billion) made up 53 percent of those funds.

"Arguably, the US economy as we know it – dominated by Pentagon, corporate, Wall Street and congressional interests – would cease to exist were it not for the gargantuan government-subsidized military budget," he argued.

'Make More War': The Corporate Engine Behind US Foreign Policy
In fact, the US spends more on defense than China, Saudi Arabia, Russia, Britain, France, Germany, India, Japan and South Korea combined. These are the top ten military spenders, but their defense budgets pale in comparison to that of the US.

The US, Cunningham asserted, needs to fuel the "frenzy of fear and loathing" on a global scale to keep its budget and by extension the economy afloat. This is the primary reason behind unsubstantiated claims that Moscow is "aggressive" or "resurgent," as NATO's top military brass has said in the past.

"This demonizing of Russia, as with other global enemies, is a necessary prop for the American military-industrial complex," he noted. "Structurally, the US economy has ossified into a war economy and the only way for this to be maintained is for the US to be continually placed on a war footing, either in the form of a cold or hot conflict."

Cunningham further said that if the US military budget were reduced to that of other nations, the US military and industrial complex would cease to exist. In fact, he added, the impact would be so dramatic that "the American state as we know it would collapse."