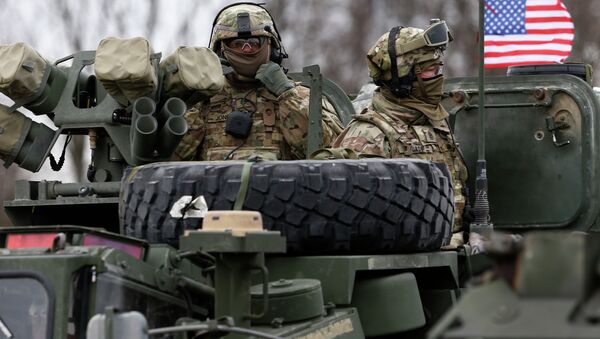 "[President Dwight Eisenhower] was suggesting…that the danger for the United States was that these massive military contractors, these military-industrial firms, would eventually be able to control both sides of the government, both major parties, and be able to effectively create policy to their own liking," Draitser told Loud & Clear’s Brian Becker, paraphrasing the former World War II five-star general and US President’s 1961 warning.

Dilma Suspended: Coup Plotters March Ahead but Will Brazil Erupt?

While President Barack Obama ran on a platform of reigning in US military endeavors, he has proven unable – or unwilling – to do so.

"If you look at it in its totality, Obama really works hand-in-glove with the military-industrial complex."

"[The bill shows] increased spending. I believe $1.5 billion for new aircraft. $1.5 billion for F-35s manufactured by Lockheed Martin. Army helicopters, Apache strike teams. We could go on and on down the list of all of these increases in spending.

"The consensus is 'make more war.'"

Even presidential hopeful Bernie Sanders, one of the most progressive members of the US Congress, isn’t guilt-free.

"Bernie Sanders lobbied for F-35 production in Vermont," Draitser says. "He has a vested interest in making sure that this military program…took place in Vermont. He lobbied for it, he was in favor of it, and he’s gone down, at least in Vermont history, as a major supporter of that program.

"So even when you go to the left-progressive end of the political spectrum, they have a vested interested in making sure that programs such as the F-35 continue."

The problem also relates to the Obama Administration’s inability to close the detention center at Guantanamo Bay.

"When in fact it is a consensus that Guantanamo stay open."

The military-industrial complex is also the driving factor behind the military buildup in Eastern Europe, despite claims about defending against "Russian aggression."

"The beneficiaries of these types of policies are Lockheed Martin and Raytheon and Boeing and all of these massive multinational military corporations that make hundreds of billions of dollars off of precisely these kinds of policies," he says.

"When [NATO] talks about spending money in Eastern Europe to ‘reassure our partners,’ what they really mean is bolstering US military power along Russia’s western flank.