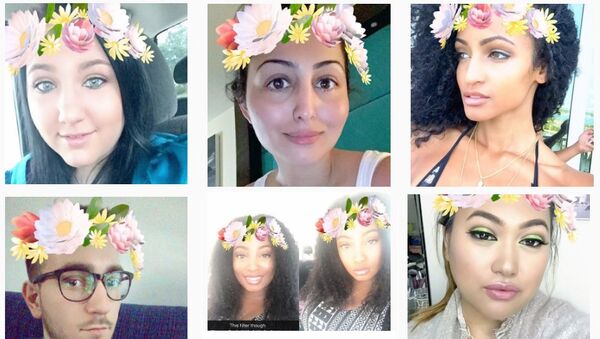 The popular smartphone messaging app Snapchat has come under fire again, this time because of a filter that enables users to "whitewash" their features.

Snapchat is under close scrutiny again as its users report that the app keeps "whitewashing" their faces.

The face-altering features on the app apparently "whitewash" the users' pictures. For example, one of the filters on the app that allows you to add a flower crown to your picture, appears to lighten the skin. This is also the same for the "beautifying" filter, which lightens the skin, eyes and also makes the nose and chin appear smaller.

idk why snapchat filters whitewash so much but im having fun pic.twitter.com/fIUdHI6G1M

Since its launch, the popularity of the Coachella-inspired filter, users have voiced their disapproval on Twitter regarding how the app keeps whitening their pictures, especially if the user is of a darker skin complexion.

snapchat filters whitewash so much its annoying lmao my neck is literally 2 shades darker but ok? pic.twitter.com/LRr2WqGIK6

Others were also unimpressed by Snapchat's skin lightening app:

Why did Snapchat whitewash me pic.twitter.com/UuLK9toNoy

And some simply want it fixed:

This is not the first time however, the social media application has faced an outcry over "whitewashing."

On April 20, known as "Weed Day" and celebrated by pot smokers worldwide, Snapchat offered a Bob Marley filter to mark the occasion. When a user snapped a picture of themselves, the filter would add a cap and dreadlocks to the user's face, in addition to it making the skin slightly darker as well.

Some saw it as an insult, reminding them of "blackface" — a form theatrical makeup used in the 19th century and widely considered to be racist.

Snapchat defended the Marley filter by saying, "It gives people a new way to share their appreciation for Bob Marley and his music."

There are those however, who have come out in defense of Snapchat, saying that the skin lightening feature is like having a flash on a camera.