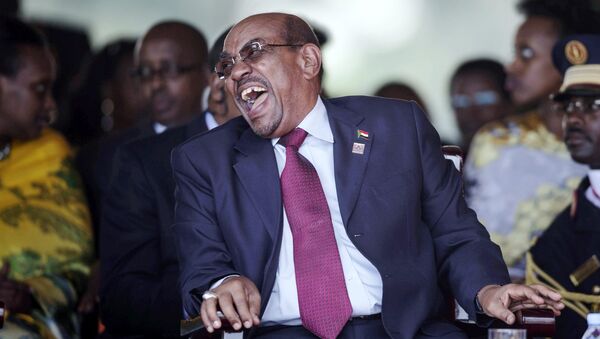 © REUTERS / Edward Echwalu
Subscribe
In an effort to curb refugees coming from Africa, the EU will partner with Sudanese dictator, President Omar Al-Bashir.

The latest deal by the EU to stop migration from Africa is so top secret, according to a staff member under the EU High Representative for Foreign Affairs, Federica Mogherini, that Europe's reputation could be at stake, if it was ever revealed. It appears the war on immigration has taken a turn, some would say, for the worst.

The ambassadors of 28 EU member states discussed the top secret move on March 23rd 2016. The European commission warned the attendees the proposals where under no circumstances to be revealed.

The EU member states agreed that they would work with dictators across Africa to stop the huge influx of migrants coming from the continent.

One of these dictators was of course the president of Sudan, who is considered a war criminal. The International Criminal Court (ICC) in the Hague has a warrant out for the arrest of the Sudanese President, relating to charges concerning genocide and crimes against humanity in the Darfur conflict.

"The first warrant for arrest for Omar Hassan Ahmad Al-Bashir was issued on 4 March 2009, the second on 12 July 2010. The suspect is still at large. Next steps: Until Omar Al Bashir is arrested and transferred to the seat of the Court in The Hague, the case will remain in the Pre-Trial stage. The ICC does not try individuals unless they are present in the courtroom," a statement on the ICC's website reads.

"Museveni must ensure that the next flight #OmarAlBashir takes flies directly to The Hague where justice awaits him" https://t.co/Q8QgVNx6p5

There are also claims by the NGO, Amnesty International, that president Omar al-Bashir tortured members of the opposition.

"Uganda must face up to its international obligations and arrest Omar Al-Bashir who is wanted on charges of genocide," said Muthoni Wanyeki, Amnesty International's Regional Director for East Africa in a statement released on 12 May 2016.

To add further fuel to the fire, the United States have accused Sudan of providing financial support to terrorists.

German Chancellor, Angela Merkel, has also confirmed that Sudan will be funded in order to improve peoples living conditions and to stop the flow of migrants into the EU. The German Chancellor said, "I strongly believe that we must improve peoples' living conditions." This will involve providing US$45 million to eight African countries including Sudan, from the Emergency Trust Fund.

The information came from leaked minutes obtained by Spiegel, a German online news outlet. However regardless of the Sudanese President's crimes against humanity, Europe still plans to send cameras, scanners and servers for registering refugees in Sudan.

They will also provide training to their border police and help in the construction of two camps with detention rooms for migrants.

Although no concrete decisions have yet been made, the German Ministry for Economic Cooperation and Development have confirmed that the action plan is binding.

"The assistance being provided by Germany will enable refugees to receive training so that they have the possibility to earn a living, for example, by working in the agricultural sector, by making furniture or as auto mechanics," a statement on their website it reads.