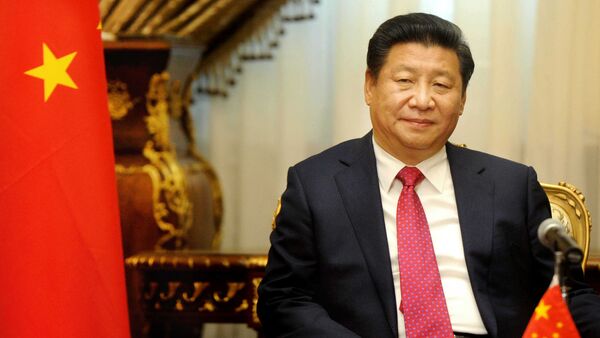 Pepe Escobar
All materials
Let’s start by examining what the Dragon himself – President Xi Jinping – has to say about China being largely derided in influential Beltway circles as a House of Cards.

Xi has forcefully dismissed the notion that a House of Cards power struggle has been raging at the rarified heights of the Chinese Communist Party (CCP). Yet at the same time he’s adamant; “conspirators”, “careerists”, “cabals” and “cliques” are attempting to undermine the CCP from within.

Thus, with ironic/poetic justice, a 42-part series on corruption in China – titled In the Name of the People and financed by the Middle Kingdom’s top law enforcement agency – is bound to go live before the end of 2016, featuring a CCP stalwart as the bad guy (that’s a first). Call him the Chinese Frank Underwood.

This means that what Xi is saying – and acting — live will be mirrored on hundreds of millions of Chinese screens, pitting conflicting factions within the 88 million-member CCP. Xi’s war on corruption has produced a rash of severely disgruntled CCP officials – to put it mildly.

Xi Jinping's Charm Offensive: China Extends a Helping Hand to the Mideast
Xi not only is the Commander-in-Chief in the fight against corruption; he’s now Commander-in-Chief of China’s joint battle command center as well. He monitors a [Central Military Commission] Chairman Responsibility System as well as the central guard corps, which monitors the security of all other CCP heavyweights.

Add to these Xi’s status as CCP’s general secretary, chairman of the Central Military Commission, president of the national security commission and head of the top group for reform of the Chinese system, and a Harvard academic who refers to him as “the chairman of everything” does not seem to be that far off the mark.

Yet even this awesome concentration of power does not mean that Xi is an unassailable deity. On the key drama – the state of the economy – it has emerged that in a recent interview by the People’s Daily with an anonymous “authoritative person”, printed on the front page and exposing deep economic divergence among the CCP leadership, the “authoritative person” in question was none other than Xi.

He had to take to the key media read by anyone who’s anyone in China to press his point on how to fix China’s debt-ridden economy; low growth is OK, and the new normal; as for blind credit expansion/monetary easing, that’s not OK. Xi, once again, is adamant; it’s now or never to start a painful restructuring of the Chinese system.

Beware the “nests of foreign spies”

Xi Jinping does wield astonishing power. There can’t be any other way. Imagine the man on top of a civilization-state of 5,000 years who needs, among myriad other crucial issues, to; tweak/manage an economic system that was successful for over 30 years but now needs to be upgraded; shift the system from export-led demand to domestic consumption; manage the aspirations – and broken dreams – of a vast working class including millions of newly unemployed; reorganize monster state-owned enterprises (SOEs); find ways to get rid of Himalayas of bad bank loans and “nonperforming” investments; downsize and at the same time vitally upgrade the Chinese military.

And if that was not enough, Beijing has to be fully alert 24/7 about all those non-stop Pentagon provocations – actual and rhetorical – centered in the South China Sea.

Deadly Embrace: Washington Surrounding China With Missile Defense Network
You’ve got to be alert. Full time. All the time. And be alert at “foreign hostile forces” or, more plainly, “nests of foreign spies” who want you to be mired in chaos. Thus the new law on NGOs operating in China. There are too many — over 7,000. And the (hidden) agenda for quite a few – from NED to the Soros gang — is to try to promote pure, unadulterated color revolution, as difficult as that may be in ultra-regimented China.

Yet it worked in Brazil – a BRICS weak link. The CCP leadership has carefully – and silently – understood the Brazilian lesson, and is fully aware that Exceptionalistan would stop at nothing to slow down China’s already spectacular global reach. So if you’re a NGO operating in China, from now on you need to find an official Chinese sponsor and register with local police.

Back to the Chinese economy, the mantra across multiple, powerful Beltway factions is that a crash is imminent. Once again; the House of Cards theme.

China’s total debt is now a whopping 280% of GDP. That includes the 115% that apply to SOEs’ debts; in Japan, for instance, that SOE figure is only 31%. Yet what really matters is that only a maximum of 25% of Chinese SOEs’ debts will need to be restructured.

Xi’s strategy is that the Goddess of the Market will turbo-charge those SOEs, not kill them. So forget about the CPP handing out control of the Chinese economy to companies that the CCP itself does not control. No wonder what’s left for US Big Capital’s spokespersons is to carp about a House of Cards.

It’s never enough to remind everyone that absolutely everything that’s happening in China now is subordinated to Xi’s official target of achieving “a moderately prosperous society” (xiaokang shehui) by the 100th anniversary of the CCP’s founding, in 2021.

That’s a mere five years from now. More long term, 2049, is the target of achieving a “socialist modernized society” (shehuizhuyi xiandaihua shehui) with a $30,000 GDP per capita; that should tie in with the celebration of the 100th anniversary of the founding of the People’s Republic of China (PRC).

Beijing Slams Pentagon Report on Chinese Military Activity
Beijing’s army of planners estimate that this overwhelming target is achievable if the Middle Kingdom is able to produce over 30% of global GDP by 2049; for comparison, that’s about 1 and ½ times more than the proportion currently produced by the US (and considering that the US does not manufacture much apart from weapons and infotech.)

As breathtaking as this vision may be, it’s always reduced by the same old catastrophist Western “experts” to variations of Xi being the new Mao Zedong. That’s so pedestrian. The men – and the historical contexts – are radically diverse. Mao decided on a few core issues by himself – and left the rest to his underlings. The Little Helmsman Deng Xiaoping was a man of consensus. Xi decides by himself on virtually everything – but he does pay attention to some selected advisers. Examples include the Ministry of Trade, which first came up with the concept that developed into the New Silk Roads, and Liu He, the advisor who conceptualized Xi’s current economic strategy.

The fact that Xi is now designated as the “core” (hexin) of the Beijing leadership is not such a big (Maoist) deal. The word in Beijing is that an assembly line of editors is now compiling a book of Xi thought (sixiang) that would make him as crucial as Mao as a contributor to Sino-Marxist theory. So what? Xi is a man in a rush, on a roll and with a mission – and 2021 is just around the corner. House of Cards? No; this looks more like a case of Xi landing a Full House on the table.