State of Emergency Declared in Canada’s Alberta Province Amid Wildfires 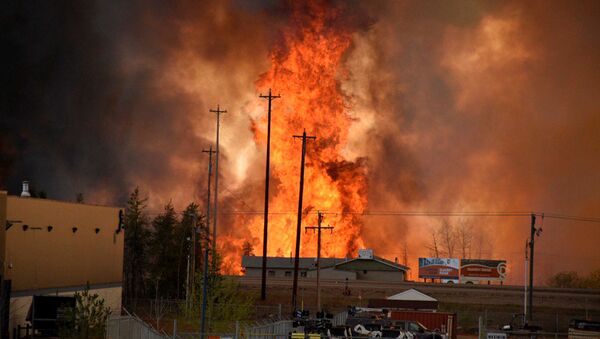 Mass Evacuations at Canadian Wildfire
MOSCOW (Sputnik) – Canada’s western Alberta Province has declared a state of emergency amid wildfires that have forced over 80,000 people to flee their homes, local media report.

According to Notley, about 1,600 buildings were hit by the fire and the outlook remains grim as the blaze is moving north.

Toronto Star says the fire is still out of control, but there have been no reports of injuries or deaths.

A wildfire near Fort McMurray, located in Canada's oil-rich western province of Alberta, was discovered late on Sunday and spread into the city on Tuesday as winds blew in the direction of populated areas.

On Tuesday, the Regional Municipality of Wood Buffalo said that the entire city of Fort McMurray with a total population of over 60,000 had been evacuated after wildfires were fanned into populated areas by unpredictable winds.