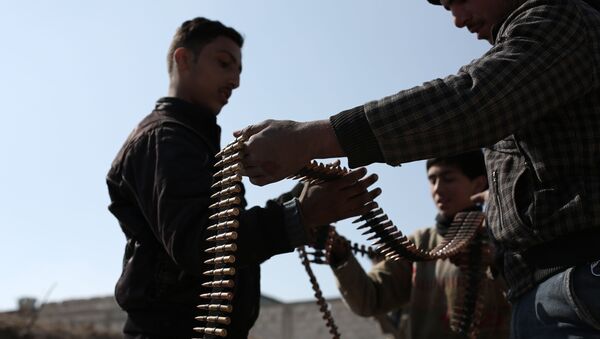 The United States objects to adding Ahrar ash-Sham and Jaish al-Islam to the UN sanctions list because they operate as proxy forces inside Syria for key allies like Saudi Arabia, Turkey and Qatar, experts told Sputnik.

WASHINGTON (Sputnik) — On Wednesday, US State Department spokesperson Mark Toner said putting Ahrar ash-Sham and Jaish al-Islam on the sanctions list would be damaging to the cessation of hostilities in Syria.

Russia submitted a request to the United Nations on Wednesday to add the two groups to the terrorist list, which already contains the Daesh and al-Qaeda.

The United States, Bokhari continued, objects to designating Ahrar ash-Sham and Jaish al-Islam as terrorist entities because three of Washington’s key allies in the region are supporting these groups.

US opposition to the move, Bokhari added, has nothing to do with a ceasefire in Syria that never existed in the first place.

Daesh-Linked Hackers Post List of New Yorkers to Target
Both Ahrar ash-Sham and Jaish al-Islam are Salafist jihadist organizations that share the same ultimate goal of first toppling Syrian President Bashar Assad and then proclaiming an Islamic state, he added.

Exactly what the Islamic government would look like, Bokhari suggested, is anyone’s guess because none of the members of Jaish al-Islam and Ahrar ash-Sham themselves even know, outside of implementing sharia law.

Bokhari claimed that what these groups want, however, is irrelevant because of their limited territorial reach and dubious connections.

"One of the biggest problems with Ahrar Ash-Sham’s is that one of their biggest allies is Jabhat al-Nusra," Bokhari pointed out. "This is a big complication for the Americans."

Radio show host and political activist Stephen Lendman told Sputnik that Ahrar ash-Sham and Jaish al-Islam are not only proxies of Saudi Arabia and Turkey, but the United States as well.

"These terrorist groups are US proxy foot soldiers, serving US-led Western and Israeli interests along with Riyadh’s and Ankara’s," Lendman claimed.

Russian Foreign Minister Sergei Lavrov, Lendman added, and other Russian officials have known all along that all of the Syrian anti-government groups are terrorists, not so-called "moderate rebels."

"Washington’s goal from the outset of the conflict along with its NATO and regional partners is regime change," Lendman noted.

The United States wants to replace a sovereign independent Syrian government with a US-controlled puppet state, he suggested.

Earlier on Friday, Permanent Representative of Russia to the UN Office and Other International Organizations in Geneva Alexey Borodavkin said Moscow has not received confirmation that Jaish al-Islam and Ahrar ash-Sham have joined the new ceasefire regime in Syria, that is supposed to take effect in Syria’s capital Damascus and its suburbs for 24 hours and in Latakia for 72 hours at midnight on April 30.