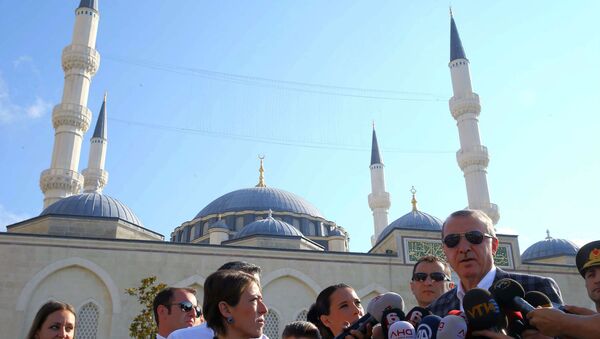 © AP Photo / Uncredited
Subscribe
Following the Turkish government’s decision to sentence two journalists for publishing images of the Prophet Muhammad, Kemal Okuyan speaks with Radio Sputnik’s Loud & Clear to consider the question of whether Turkey is still a secular state.

"They are being accused of insulting the holy beliefs of Turkish people," Okuyan, a journalist with SoL newspaper, tells Loud & Clear, referring to two reporters with Cumhuriyet, who illustrated articles with satirical images of the Prophet Mohammed from controversial French humor magazine Charlie Hebdo.

"The images were not insulting anything, but it was against terror…there was nothing related to it insulting religion or what they call in Turkish courts 'insulting the holy beliefs of people.'"

Charging journalists with crimes of insulting religions is shift away from the secular government in place prior to the administration of current President  Erdogan.

"This week, the main speaker of parliament, from AKP, the government party, declared that in the new constitution, we don’t need the principle of secularism and there should be, somehow, Islam inside the constitution.

Historically, Turkey’s secularism was crucial, following the breakup of the Ottoman Empire.

"…One of the countries that has some secular identity was Syria," Okuyan says, though its future is far from certain. "Turkey was also one of the secular countries, starting from the republic period since 1923."

But since the end of World War II, Islam has been used to attack progressive forces within the country.

"Now, with AKP, 15 years, we have no secularism, because of the education system…[in which] education for Islam is required by law," he says. "There are no public schools now. They all turned [into] religious schools.

"The last castle for secularism is the constitution, and now there is a discussion on this."

"During this Syrian crisis, from the beginning, our newspaper [SoL] did a lot of good things. It was an alternative news source. So this is why there are real systematic and continuous attacks," Okuyan says. "It is not only cases against the writers or contributors like me, but also the news quarterly is under attack without any explanation. And without any law."

000000
Popular comments
Sibel Edmonds marked Turkey as an upcoming ongoing for a decade. She has a lot of valuable information that the MSM doesn't like to report on. Edomnds is a smart, competent and stylish woman. Edmonds makes the great point that I comment about regarding the Kurds serving Israel and NATO only to be betrayed over and over. www.boilingfrogspost.com/2015/08/13/the-eyeopener-report-sibel-edmonds-on-turkey-syria-the-kurdish-q Edmonds and Corbett are examples of real intel minds and analysts. Edmonds and Corbett do a great job of laying it all out. Edmonds describes how chaotic Erdogan's government was in August and we all know now that Erdogan somehow had a landslide victory a few months later. Great, great job on this interview.
jas
29 April 2016, 22:44 GMT
000000
It is a real shame that competitive religious politics in the Muslim world has created a situation in Turkey, where Erdogan is taking the country back and destroying years of secularism
Sridhar.sid
30 April 2016, 01:11 GMT
000000
Newsfeed
0
New firstOld first
loader
LIVE
Заголовок открываемого материала
Access to the chat has been blocked for violating the rules . You will be able to participate again through:∞. If you do not agree with the blocking, please use the feedback form
The discussion is closed. You can participate in the discussion within 24 hours after the publication of the article.
To participate in the discussion
log in or register
loader
Chats
Заголовок открываемого материала
Worldwide
InternationalEnglishEnglishMundoEspañolSpanish
Europe
DeutschlandDeutschGermanFranceFrançaisFrenchΕλλάδαΕλληνικάGreekItaliaItalianoItalianČeská republikaČeštinaCzechPolskaPolskiPolishСрбиjаСрпскиSerbianLatvijaLatviešuLatvianLietuvaLietuviųLithuanianMoldovaMoldoveneascăMoldavianБеларусьБеларускiBelarusian
Transcaucasia
ԱրմենիաՀայերենArmenianАҧсныАҧсышәалаAbkhazХуссар ИрыстонИронауОssetianსაქართველოქართულიGeorgianAzərbaycanАzərbaycancaAzerbaijani
Middle East
Sputnik عربيArabicArabicTürkiyeTürkçeTurkishSputnik ایرانPersianPersianSputnik افغانستانDariDari
Central Asia
ҚазақстанҚазақ тіліKazakhКыргызстанКыргызчаKyrgyzOʻzbekistonЎзбекчаUzbekТоҷикистонТоҷикӣTajik
East & Southeast Asia
Việt NamTiếng ViệtVietnamese日本日本語Japanese中国中文Chinese
South America
BrasilPortuguêsPortuguese
NewsfeedBreaking
14:52 GMTBelarus Denies NYT Report on Situation Surrounding Ryanair Plane Landing in Minsk
14:50 GMTNew York AG Reportedly Seeking Deposition From Trump in Fraud Probe Into Ex-President's Businesses
14:34 GMTSoros Funnels Millions Into Dark Money Hub Used By Defund the Police Activists, Grant Database Shows
14:20 GMTBiden Announces Presidential Initiative for Democratic Renewal at Democracy Summit
14:12 GMTRussian Scientists Suggest Teaching AI Creative Writing
14:11 GMTNew Zealand Police Reportedly Postpone Use of Facial Recognition Technology
14:01 GMTFrance to Initiate Nationwide Disaster 'White Plan' Amid 5th COVID Wave
13:50 GMTSajid Javid Calls Mandatory Vaccination 'Ethically Wrong' Amid Omicron Spread
13:45 GMTLithuanian Prime Minister Receives Letter of Resignation From Transport Minister
13:43 GMTMan With Gun Trying to Clear Security at Congressional Office Building Arrested, Reports Say
13:43 GMT'It's a Historical Day for Us, Battle Has Been Won,' Say Indian Farmers Ending Year-Long Protest
13:31 GMTChina: UK, US, Australia to 'Pay Price' for 'Mistaken Acts' Of Diplomatic Boycott of Winter Olympics
13:21 GMTDelhi's Ruling Party AAP Blames Modi Gov't for Charging Devotees in Temples
13:20 GMTBiden Administration Reportedly Plans to Press Ukraine to Cede Autonomy to Donbass
13:11 GMTUS President Biden Delivers Opening Remarks at 'Democracy Summit' Day One
13:01 GMT'Historic Disaster': Spanish Press Blasts Barcelona After Their Champions League Elimination
12:56 GMTKiev Deploys Heavy Weapons Near Donbass Contact Line, Moscow Says
12:51 GMTNearly 100 Former British Council Staff Still Hiding in Afghanistan, Reports Say
12:50 GMT'We Can’t Guarantee Your Safety': LA Detective Warns Against Visiting City Over Crime Surge
12:48 GMTPolish Border Guard Says Illegal Migrants Continue Attempts to Cross From Belarus