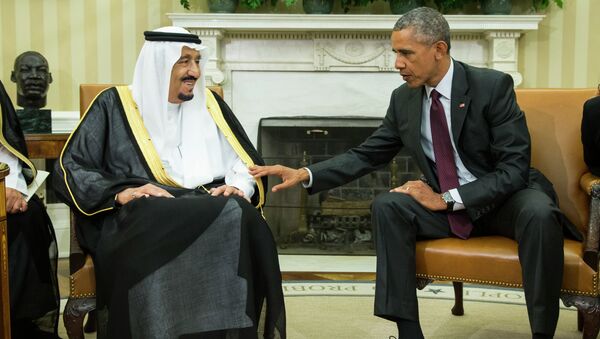 © AP Photo / Evan Vucci
Subscribe
US President Barack Obama's latest visit to Saudi Arabia is unlikely to put US-Saudi relations on the path to normalization, according to Salman Rafi Sheikh; however, the expert does not exclude the possibility that the new presidential administration could mend the relationship.

The deep divergence between Washington and Riyadh has slowly, yet surely, emerged over the years, according to Salman Rafi Sheikh, research-analyst of International Relations and Pakistan's foreign and domestic affairs.

"Barak Obama's visit to Saudi Arabia has happened at a time when political friction between the two states has reached a point where both have started to 'threaten' each other-hence, the need to bring their ties back to 'normal.' While this is seemingly what both the US and Saudi Arabia aim at achieving, the gap seems to be too big to be filled by visits merely," Sheikh writes in his article for New Eastern Outlook.

'The New Normal': Why US-Saudi Geopolitical 'Honeymoon' Ended
In the eyes of Riyadh, Washington should change its foreign policy course and resume its pressure on Iran. Needless to say, the White House is not interested in doing this.

However, Saudi Arabia's vocal discontent with Washington's revamped relations with Tehran is only half the story.

"The 'best friends falling apart' scenario owes its existence to multiple failures that both, as allies, have had to face on various fronts in the Middle East," the expert narrates, referring to a string of events that aggravate tensions between the two longstanding partners.

Washington's failure to topple Bashar al-Assad, the Obama administration's "flirting" with Iran, as well as the emergence of the US shale oil industry are adding fuel to the fire of the House of Saud's dissatisfaction with Barack Obama.

Although Riyadh is still the largest buyer of American military hardware, "their mutual friction is real and the cardinal purpose of Obama's visit is to reduce it," Sheikh stresses.

But not only Riyadh is demonstrating its growing disappointment: Washington also has enough reasons to criticize its ally. In his interview with Jeffrey Goldberg of the Atlantic, Obama used the term "free riders" to describe some of America's allies, most notably Saudi Arabia.

What Exactly is Washington Hiding in Classified 9/11 Commission Report?
Obama also noted that Saudi Arabia needs to "share" the Middle East with Iran.

"The competition between the Saudis and the Iranians — which has helped to feed proxy wars and chaos in Syria, Iraq and Yemen — requires us to say to our friends as well as to the Iranians that they need to find an effective way to share the neighborhood and institute some sort of cold peace," Obama told Goldberg.

"I don't think that we should expect any new president in America to go back to, as I said, the yesteryear days when things were different," the Saudi Prince said.

The Plot Thickens: Did the Saudis Help Hide Osama Bin Laden?
And it seems he is right: while Obama is trying to fix the crumbling relations, US lawmakers are pushing ahead with legislation that "proposes a restriction on sales or transfers of US-made air-to-ground weapons to Saudi Arabia," in addition to the bill S.2040 regarding the 9/11 terror attacks, Sheikh notes.

"Obama's visit, although important in the current scenario, is, therefore, unlikely to put US-Saudi relations on the path to normalization…  For the US, the short term objective is to cool the Saudis down. Long-term normalcy does not seem to be forthcoming until the new US administration comes to office next year," he concludes.