This is How Islamization of Turkey May 'Lead to Civil War' 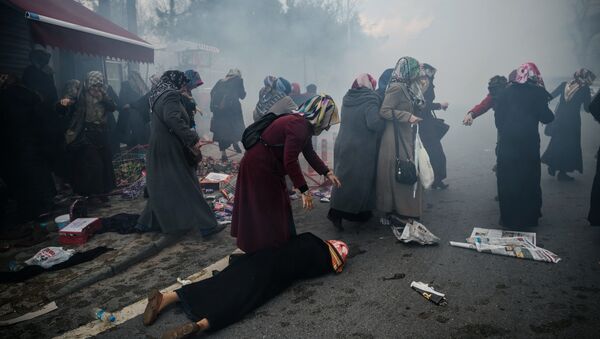 © AFP 2021 / OZAN KOSE
Subscribe
The Turkish police have used tear gas against demonstrators in Ankara. The protesters gathered outside the country's parliament on Tuesday to oppose calls for the government to adopt a religious constitution.

Turkish Parliament Speaker Urges to Abandon Secular Constitution
The Turkish police have used tear gas against demonstrators in Ankara. The protesters gathered outside the country's parliament on Tuesday to oppose calls for the government to adopt a religious constitution.

In an interview with Radio Sputnik, Turkish political analyst and author Tarik Gunersel said the current situation in his country is "alarming" and that Islamization of the country's constitution could result in a devastating civil war.

"We have come to a point when soon we may find ourselves in a state of civil war between secularists and Islamist fundamentalists," Gunersel said.

According to the expert, the latest statistics look pretty discouraging. While four years ago 12% of the population supported the idea of introducing Sharia, today this figure has risen to 16 %.

Gunersel stressed that a religious constitution would allow the violation of basic freedoms and increase violence in the country.

"Let's not forget that a number of these people [Islamists] are ready to take arms […] and they have no respect for human rights," he said.

Turkey Demands Removal of Photo Accusing Erdogan of Killing Teen
On Monday, Turkish Parliament speaker Ismail Kahraman said that the predominantly Muslim country "must have a religious constitution". However, the head of the parliament's constitution commission, Mustafa Sentop, rebutted the statement, saying there were no discussions on the removal of secularism.

"We cannot accept it [Islamization of the country]. There will be a civil war," Gunersel said.

According to him, most Turks are moderate Muslims and, generally, secular.

"The problem is that those who do not want violence do not know how to stop this aggression," the expert concluded.

000000
Popular comments
FlorianGeyer, you are correct, but the TAF is undercut from Gülens men. There are thousands of those creatures in the TAF. Good thing? They work on it to get rid of those creatures. btw.. End up in civil war? Turkey is already in it, since a while. War against PKK. The last days in Kilis? War against Islamists. Oh.. Turkey is not on the way, Turkey is in the middle of the civil war.

Syria Forever
26 April 2016, 22:04 GMT4
000000
The problem is with that speech, akp signed its own end since erdo and davutoglu are from the brotherhood (under cia control just like in Egypt) they will lead, indeed, turkey to the wall..