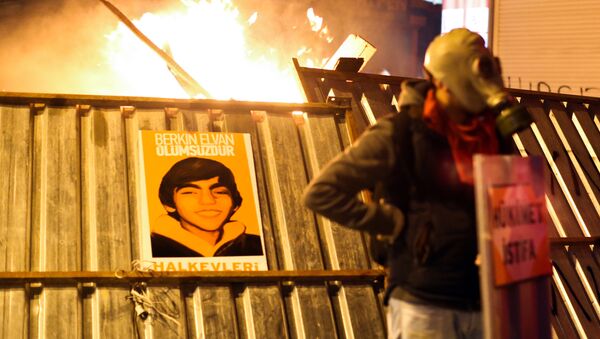 © AFP 2021 / GURCAN OZTURK
Subscribe
Turkish President Recep Tayyip Erdogan's feathers have been ruffled again. This time, Swiss photographer Demir Sönmez, who is currently presenting his works in a photo exhibition in Geneva, blamed Turkish authorities for having killed a 15-year-old boy during protests in Turkey.

Sönmez presented a picture of 15-year-old Berkin Elvan who was hit by a tear gas canister thrown by Turkish police during Gezi Park protests in Istanbul in June 2013 and died 269 days later after falling into a coma in March 2014. The boy was not involved in the protest campaign and was just an innocent passer-by, heading to a nearby store to buy bread for his family.

The photo is a part of a display in an outdoor exhibition at the United Nations headquarters in Geneva. The caption on it says: "My name is Berkin Elvan. The police have killed me on behalf of the Turkish Prime Minister."

The boy's death fueled sharp criticism against Erdogan and the behavior of the Turkish police. Recently, when the photo was exhibited in public, Turkish authorities demanded the picture be taken down, Turkish newspaper Hurriyet reported. 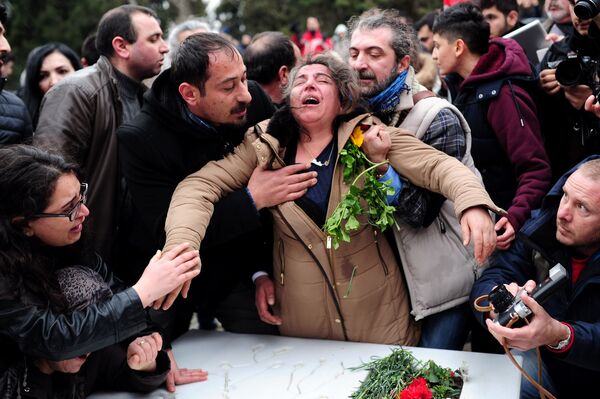 Berkin Elvan's mother Gulsum Elvan (C) grieves over her son's grave in Istanbul on March 7, 2015 as thousands of people marched to mark the first anniversary of the death of the youngest victim of the Gezi Park protests.
© AFP 2021 / OZAN KOSE

'We Will Continue to Write': Journalist Fights Erdogan’s Attack on Press
A spokesman for the canton of Geneva, Philippe d'Espine, said in an interview with AFP that a decision on the issue is expected to be given on Tuesday.

The demand is another sign of Turkey's continuing crackdown on freedom of expression. Since taking his office in the summer of 2014, Erdogan repeatedly suppressed critical remarks about his policies and initiated around 2,000 criminal proceedings against Turkish citizens on the charges of allegedly insulting the head of the state.

In last few weeks, the Turkish leader even went further, forcing the German government to start a criminal prosecution against German journalist Jan Böhmermann. In his TV show, the satirist performed a poem, harshly criticizing the Turkish President for repression of the Kurds and violations of human rights.

000000
Popular comments
let's get that foto all over the internet.