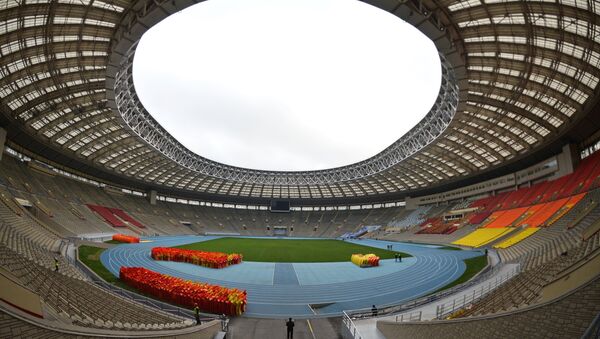 © Sputnik / Alexey Kudenko
/
Go to the photo bank
Subscribe
FIFA President Gianni Infantino was impressed with Russia’s preparations for the 2018 World Cup, stating that everything is going according to the plan.

"I am impressed with what is going on in football in this country, not only with staging the FIFA World Cup but also the Russian Football Union's plans when it comes to football development," Infantino said, according to the FIFA official website.

FIFA Head to Visit Russia, Qatar to Monitor World Cup Preparations in April
On Tuesday, Infantino went to Moscow for the first time as the president of FIFA to meet with Russian football officials and see how the overall progress is taking place. Infantio was elected as president of FIFA in February after Joseph Blatter announced his resignation from the position amid an ongoing corruption scandal involving the organization.

Infantino also visited the Luzhniki Stadium, where the final game of the World Cup will take place.

"Inside you can feel the atmosphere of football. It's great to see that outside the historic parts have been preserved, while inside it will be a state-of-the-art football venue-the right setting for the game's most important tournament," Infantino said upon his visit to Luzhniki.

After his visit, Infantino said that the 2018 football tournament in Russia will be the best FIFA World Cup in history.

Russia Moves to Pick Final World Cup 2018 Mascot
Despite making tremendous progress in preparing for the biggest football tournament, the Russians shouldn't take it easy and keep working as hard to make sure to showcase their football prowess to the whole world.

The only question that Infantino had was whether he would speak better Russian than Russian Sports Minister Vitaly Mutko would speak English in 2018.

The 2018 FIFA World Cup will be held from June 14 to July 15 in 11 Russian cities, including Moscow, Ekaterinburg, Kaliningrad, Nizhny Novgorod, Rostov-on-Don, Samara, Saransk and Volgograd.