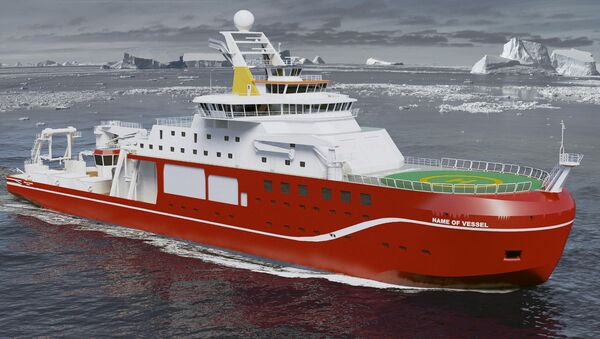 When the National Environment Research Council (NERC) opened up the naming of its US$284 million Arctic explorer ship to the public last month, the vessel quickly became upstaged by the competition itself.

Amidst the options voted on by the British public in an online poll, were names like 'Henry Worsley' (after the British explorer) and 'David Attenborough' (after the naturalist and broadcaster). But before long, some slightly less po-faced names began to emerge; names like 'Clifford the Big Red Boat', 'It's Bloody Cold Here', 'I Like Big Boats & I Cannot Lie' and what went on to become the runaway favorite by tens of thousands of votes: 'RSS Boaty McBoatface'.

The proposed name went on to become an Internet sensation, and briefly inspired the renaming of a train in Portsmouth, England to 'Trainy McTrainface' and a Cheshire Cheesemonger even released a special edition — 'Cheesy McCheeseface'.

Supporters of the name 'Boaty McBoatface' could however be disappointed, because despite leading its nearest rival by around 90,000 votes, the Science Minister Jo Johnson has signaled that it is unlikely to be chosen as the final name for the Arctic Explorer ship.

"You won't be surprised to know that we want something that fits the mission and captures the spirit of scientific endeavor," he said in an interview with the Daily Telegraph.

This is, of course, not the first time that a high profile naming decision has fallen foul of an online vote.

When Greenpeace launched a similar poll to name a humpback whale in the South Pacific, the name 'Mr Splashy Pants' took 78% of the vote; likewise, in 2012, the soft drink Mountain Dew had to shut down a vote on a new beverage, when the name 'Hitler did nothing wrong' won the vote.

Many won't be surprised that 'Boaty McBoatface' probably won't be chosen, but it does raise a few questions regarding maritime superstition.

@WillBlackWriter Agree, huge…I hear, Elton currently working on adapting the lyrics to Candle In The Wind again, just in case.

Once upon a time for example, it would have been considered very bad luck to name a ship after a joke, although these days it is actually quite common. Changing a boat's name however, is still considered extremely bad luck and depending on your point of view, the rejection of a public vote could be construed as a name change.

Imagine Boaty McBoatface sank and everybody died. Imagine the news having to read that out with a straight face.

Petition to Name UK Ship: Spanish Trolls Suggest Admiral Who Killed Brits
Legend has it, that you can only rename a ship if you are able to erase every trace of the original name from land or sea, thus avoiding the wrath of the gods.

Although considering the viral nature of 'RSS Boaty McBoatface' in the era of Facebook and Twitter, that could prove a difficult task.

The 129 metre long ice-breaker — due to set sail in 2019 — will be built in Birkenhead, allowing a team of 90 scientists to carry out research amidst the harsh winters of Antarctica and the Arctic.

The final name of the ship will be announced in due course.