US Soldier Reportedly Attacked By Members of Turkish Youth Union 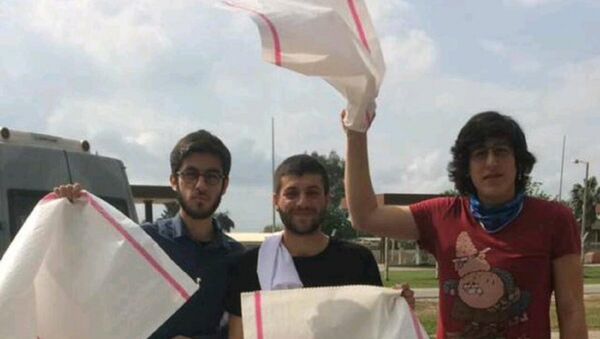 Two members of a radical Turkish youth group have been placed on house arrest after attempting to put a sack over the head of a US soldier at Incirlik air base in the country.

Members of the Türkiye Gençlik Birliği, or Turkish Youth Union, Yalcin Semir Akarsu and Cenk Kizilirmak, filmed the attempt and then uploaded photos and video to social media.

In the footage, Akarsu is heard telling the soldier, “You put sacks on the head of our soldiers in 2003. You are responsible for this and the terror events in our country.”

“Bombs explode everyday, we receive the news of martyrs. You are responsible for this. You are not able to leave your air base, but we are here, entering your air base, to put sacks on your head.”

The men were referring to a 2003 incident in which the US military wrongly arrested members of the Turkish Special Forces while they were at a safe house in Iraq. During the arrest, the soldiers placed hoods over the men’s heads, including a major. The men were not released for 60 hours, following a massive outcry against the actions of the US forces. The detention is now known as the “Hood Event,” and is believed by many in Turkey to have been a deliberate insult, the Associated Press reported.

The Turkish Youth Union was formed in 2006, and states that they are fighting “American imperialism.

In 2014, the group also targeted three sailors from the USS Ross — covering them in red paint while attempting to also put hoods over their heads. During the incident, the men chanted “yankees go home,” and called the sailors “murderers and killers.”