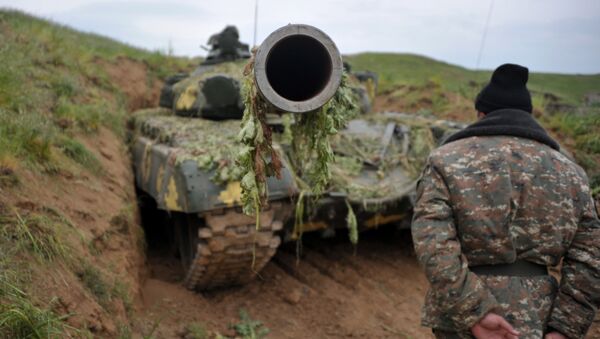 © Sputnik
/
Go to the photo bank
Subscribe
Azerbaijani President Ilham Aliyev stated that Baku stands for a peaceful settlement of the conflict in Nagorno-Karabakh based on UNSC resolutions.

"Azerbaijan stands for a peaceful settlement of the conflict in Nagorno-Karabakh based on UNSC resolutions. These resolutions demand the immediate withdrawal of Armenian troops from occupied territories…But the Armenian side continues to ignore these demands," Azerbaijan's presidential press service quoted Aliyev as saying at the summit of the Organization of Islamic Cooperation (OIC) currently underway in Turkey.

The violence in Nagorno-Karabakh, a breakaway region of Azerbaijan with a predominantly Armenian population, escalated on April 2. Following three days of heavy fighting, the conflicting sides agreed a ceasefire in the disputed region that came into force at noon last Tuesday.

However, Yerevan and Baku have since accused each other of multiple ceasefire violations.