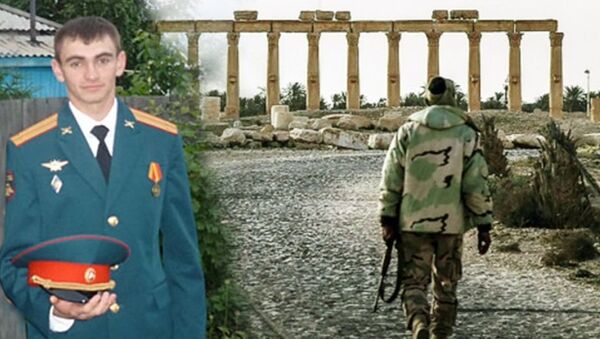 Servicemen around the world have praised the heroism of Russian lieutenant Alexander Prokhorenko who was killed during the liberation of the ancient Syrian town of Palmyra.

"Lieutenant Prokhorenko could have been our enemy yesterday or tomorrow, but as soldiers we respect the valor he displayed as a soldier himself on the battlefield and will raise a drink tonight in his honor," a post in a Facebook group devoted to the US military read.

Prokhorenko, 25, was providing intelligence and coordinating for the Russian Aerospace Forces to attack Daesh targets in Palmyra. He ordered his comrades to carry out an airstrike on his position after he was discovered and surrounded by Daesh terrorists.

"From an American soldier to a Russian Lieutenant, regardless of the uniform we wear, we all took an oath to protect our country at all costs, to protect other countries and their way of life, whom we will proudly give our own life for, I salute you, for your courage, honor and strength," Josh Marsh commented.

"This is why Russia has never been successfully invaded. You can't conquer people like this. Godspeed, Lieutenant Prokhorenko!" Robert Allen wrote.

"As an American Soldier of 23 years I Salute this BRAVE young man. We may not agree on a lot of things as countries divided but as a Soldier to Soldier. You are a TRUE Soldier," Chris Cook commented.

"American, Russian, Mexican, Japanese. It doesn't really matter where you are from or what nationality you are. Making the ultimate sacrifice for the greater good of your country and fellow nations is the ultimate and truest form of courage," Colton Lovell wrote.

"A true soldier, a man who respected his flag, what it stood for, his country and what it meant to him. This is a man, who fought to the end taking as many as he could with him, a hero on so many levels," James Wheeler wrote about Prokhorenko.

"I am an American and ex soldier and to this man, you were a true soldier. To his mother and father, you raised him right. Rest in peace Lieutenant," Steve Price commented.

"Courage is real. […] Without a doubt we can say that this man is a hero. We used to see them in Hollywood movies. But this time it is all real – just a young man who had his whole life ahead and did his duty," an author of French website Boulevard Voltaire wrote in a recent article.

Recently, an alleged transcript of Alexander Prokhorenko’s final communications with his commanders was published in social media.

Russian Officer Killed in Palmyra Proves 'Courage is not Fiction'
The Russian newspaper Komsomolskay Pravda doubted the authenticity of the conversation and asked the Defense Ministry to comment on it. The ministry said it did not issue any texts of Prokhorenko’s communications from the battlefield. It also noted that the text was initially published on the website LiveLeak. It has been known as a launch site for a multitude of fake news, the article read.

Many bloggers also emphasized that the conversation was revealed only in text form, without the initial audio source.

What is more, some phrases sound unnatural to Russian speakers. Here are some examples — "Negative, I am surrounded, they are so many of these bastards!" and "Extract ETA 10 minutes, return to the green line." They do not sound natural in Russian ("negative" is used in English-language military communications, not in Russian). "Bastards" and "the green line" look like phrases from the script of a Hollywood action movie.

Finally, the conversation seems to be too long to take place in the midst of a fierce battle.