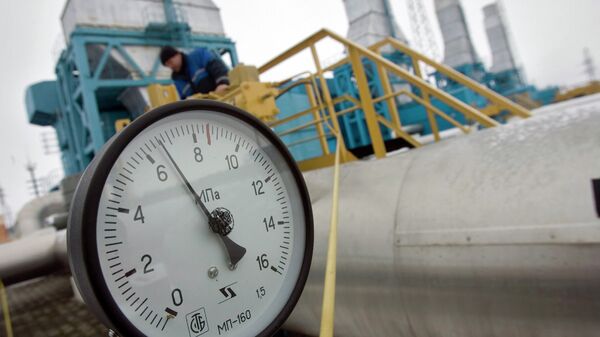 Ukraine is looking to become a transit country not only for Russian gas going to Europe, but for 'European gas' going the other way, to Romania, Bulgaria and Turkey. Ukrtransgaz has announced that it will be discussing the idea with Slovakia early next month.

Naftogaz Refuses to Resume Gas Purchases From Gazprom in Q2
Asked for comment on the ambitious initiative, Konstantin Simonov, the head of the Russian National Energy Security Fund, told Sputnik that the plan might be called brilliant, except for one hitch.

"All of this would be funny if not for one problem: has Slovakia now turned into a gas producing country? How can you negotiate on the purchase of gas from Slovakia, if Slovakia itself is an importer?"

In all seriousness, Simonov explained, "everyone understands the absurdity of this latest story about Ukraine's 'purchase of gas in Europe'. After all, what we are talking about here is the purchase of Russian gas."

"Effectively, Ukraine is offering Bulgaria and Turkey to buy this gas not directly, from the Russian transit network, but through an EU intermediary." This, the analyst notes, "is exactly what Ukraine itself is now doing, buying gas from European traders. The gas which comes back to Ukraine from Slovakia is called 'non-Russian', even though it originates in Russia."

Russia’s Gas Discount for Ukraine Expires, New Price Set Under Contract
Moreover, Simonov noted, under this scheme, were it to be implemented, Ukraine would actually be losing money, removing itself from its role as a transit country. The country's authorities, he added, "have gotten so carried away with their fight against Russia that they do not understand that their country is part of the Russian gas business as a transit country."

This may not be the case for much longer however, since Gazprom recently announced that after the end of the current contract – that is, after 2019, Ukraine's role as a transit country for Russian gas heading to Europe may end.

"It's worth noting that Russia not make any categorical statements," the analyst emphasized. "It was said that transit 'may be terminated'. Ukrtransgaz, for its part, understands perfectly well what this would mean for them…If the Europeans themselves end up not having enough gas for themselves, no one will reverse the transit of gas to save the Ukrainian neighbor. And it's pointless to invoke the supposed excess of supply over demand."

Russia, for its part, has not only increased its share in the EU gas market significantly (by 30%) over the last year – it has also "offered the EU more attractive alternatives to bypass instability-ridden Ukrainian territory. The extension of the route to Germany – Nord Stream II, is one such alternative. We want to remain a stabile gas supplier. And Ukraine always generates risks."

"It's enough to recall January 2009, when due to Ukrainian authorities Europe almost froze; or the recent cutting off of roads, the seizure of Russian trucks, the destruction of power transmission lines to Crimea, and the sluggish response in Kiev to these 'civil society activists'. We do not want to be held responsible for the huge risks associated with Ukrainian transit."