Vegetarian Munching Unicorn May Have Walked the Earth With Humans 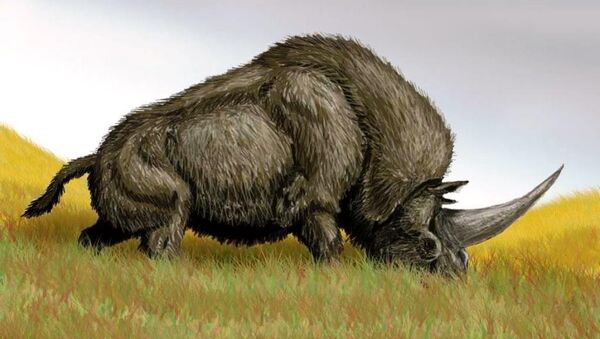 The discovery of a skull belonging to an extinct creature known as the Siberian unicorn suggests it shared the Earth with our ancestors and questions techniques used by scientists to date prehistoric remains of mammals.

The prehistoric creature called Elasmotherium sibiricum, or Siberian rhinoceros — or unicorn — was thought to have vanished from the face of the earth 350,000 years ago. However, the discovery of a well-preserved skull in Kazakhstan has left scientists thinking that the Siberian unicorn may have been around at the same time as prehistoric humans, which was 29,000 years ago.

Shpansky told Sputnik that the discovery of the skull was "unique" and after researching the shape and structure of the bones, a sample was sent to his colleagues at Queen's University in Belfast, where they used carbon dating methods to determine the creature's age. The research was published in the American Journal of Applied Science.

"In my professional experience, Elasmotherium sibiricum [Siberian rhinoceros] have been extinct for around 350,000 years. However, to my surprise, I received a different date from my colleagues in Northern Ireland — 29,000 years."

"What do these findings mean? Either the Siberian rhino lived at the same time as prehistoric humans, or there may have been problems with the radiocarbon dating method and more research needs to be done to back or debunk the findings," Shpansky asks.

Shpansky suggests that because of the length in time between when it was thought the Siberian unicorn became extinct — and the data extracted from the skull discovered in Kazakhstan — scientists and archaeologists might need to use a better method other than carbon dating to determine the remains of mammals that disappeared between 50,000 and 100,000 years ago.

The Siberian unicorn, known scientifically as Elasmotherium sibiricum, is most closely related to the rhinoceros… pic.twitter.com/ToJtf1O3e3

The Siberian unicorns were likely to be vegetarians and could weigh up to four tons, standing two meters tall and almost five meters long.

The newly discovered data from the skull could lead to further insights into the migration patterns of mammals in Western Siberia.