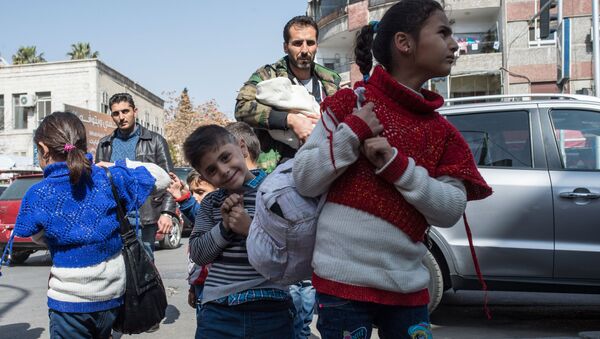 © Sputnik / Iliya Pitalev
/
Go to the photo bank
Subscribe
The launch of peace process creates a chance to maintain Syria's integrity, according to senior Russian official.

"Russia's mission has largely been fulfilled. Overall, the ceasefire is being respected, the peace process has been launched, a discussion on Syria's future constitution has begun. All this creates prerequisites to keep Syria a single, unified state in order to implement urgent political reforms," Matvienko told RIA Novosti.

The Syrians have a real opportunity to absolutely independently shape their future in a peaceful way by the adoption of the constitution, holding free parliamentary and presidential elections in the country, the speaker of the Russian upper house of parliament stressed.

Turkey Attempts to Disrupt Syria Ceasefire - Russian Parliament Speaker
The successful actions of the Russian Aerospace Forces prevented the disintegration of Syria as a state and "dramatically" changed the situation in the Arab republic, Matvienko noted, adding that these achievements would not have been possible without close coordination with the Syrian army and the patriotic opposition.

Moreover, the Russian air group has seriously weakened Daesh and other militants’ resource supply, destroying most of their weapon depots and terrorists themselves.

"Including, those [militants] originating from the former Soviet Union, Russia. In this way we have secured ourselves from their possible return, consecutive terrorist attacks and other threats. This is extremely important," she emphasized.

Moscow has been conducting a military operation against terrorists in Syria since September 30 at its president's request.

"There is one issue that the West prefers to remain silent about. I am not prone to excessive patriotism, which makes it even more pleasant to state that our participation in the Syria events has confirmed Russia's role as a world power without which it is impossible to solve any major international problems," Matvienko added.

She added that she frequently talked with her foreign counterparts, the vast majority of whom shared the opinion that Russia played a key role in ending the war and establishing peace process in Syria.

"The understanding of this is growing as well as awareness that all attempts to isolate Russia from the international community, to harm our national interests, hinder the development of the country are failing," Matvienko highlighted.

Speaking about the future of President Bashar Assad, the politician emphasized only Syrians could determine his fate.

"It is not up to us to discuss the fate of Bashar Assad. His fate is in the hands of the Syrian People."

Assad Says Would Resign if Rejected by Syrian People
Moscow should help Damascus in creating the necessary conditions for holding the elections in Syria, the speaker of the Russian upper house outlined.

Russia is one of the co-chairs of the International Syria Support Group (ISSG) consisting of global and regional powers and organizations that brokered intra-Syria talks.

The latest round of talks between the Syrian government and opposition forces opened on March 14 in Geneva wrapped up on Thursday and is due to resume around April 10.

Newsfeed
0
New firstOld first
loader
LIVE
Заголовок открываемого материала
Access to the chat has been blocked for violating the rules . You will be able to participate again through:∞. If you do not agree with the blocking, please use the feedback form
The discussion is closed. You can participate in the discussion within 24 hours after the publication of the article.
To participate in the discussion
log in or register
loader
Chats
Заголовок открываемого материала
Worldwide
InternationalEnglishEnglishMundoEspañolSpanish
Europe
DeutschlandDeutschGermanFranceFrançaisFrenchΕλλάδαΕλληνικάGreekItaliaItalianoItalianČeská republikaČeštinaCzechPolskaPolskiPolishСрбиjаСрпскиSerbianLatvijaLatviešuLatvianLietuvaLietuviųLithuanianMoldovaMoldoveneascăMoldavianБеларусьБеларускiBelarusian
Transcaucasia
ԱրմենիաՀայերենArmenianАҧсныАҧсышәалаAbkhazХуссар ИрыстонИронауОssetianსაქართველოქართულიGeorgianAzərbaycanАzərbaycancaAzerbaijani
Middle East
Sputnik عربيArabicArabicTürkiyeTürkçeTurkishSputnik ایرانPersianPersianSputnik افغانستانDariDari
Central Asia
ҚазақстанҚазақ тіліKazakhКыргызстанКыргызчаKyrgyzOʻzbekistonЎзбекчаUzbekТоҷикистонТоҷикӣTajik
East & Southeast Asia
Việt NamTiếng ViệtVietnamese日本日本語Japanese中国中文Chinese
South America
BrasilPortuguêsPortuguese
NewsfeedBreaking
15:54 GMTWe Shall Fight Them on the Benches: Johnson Responds on Whether He’ll Resign Over Partygate
15:33 GMTDrunk Priest Slaughters Man Instead of Sheep During Animal Festival in India
15:24 GMTEx-FSB Officer Turns Transgender, Wants to Champion LGBT Rights in Military & Security Agencies
15:22 GMTUN Special Adviser on Libya: 'Discourse of War Has Been Replaced by Discourse of Politics'
15:15 GMTCovid Shall Not Pass! Hong Kong Orders Mass Slaughter of Hamsters After 11 Positive Tests
15:13 GMTCleveland Browns' McDowell Arrested for Public Exposure Near School and Attack on Officer – Video
15:10 GMT'Would Be Good if He Finishes His Career at Barca': Dani Alves Wants Lionel Messi Back at Camp Nou
15:00 GMT'Hannibal Rising' Star Gaspard Ulliel Dies at 37 After Ski Resort Accident
14:41 GMTUS Pilot Union Urges 5G Rollout Halt at Airports Until Permanent ‘Fix’ Targets Safety Record Risks
14:25 GMTIran Marks Readiness to Share Advanced Military Tech With Friends and Neighbours
14:06 GMTBiden Approval Rating at New Low After One Year in Office, Worse Than Trump's, Poll Shows
13:45 GMTAngela Merkel Reportedly Rejects Job Offer From UN Secretary General in Personal Call
13:43 GMTTonga's Telecom Services Restored After Being Hit by Eruption 500 Times Stronger Than Hiroshima Bomb
13:39 GMTHi-Tech Weapons Left in Afghanistan by US Army Turn up in Kashmir as Militants Flaunt Them in Video
13:28 GMTBye Bye, Mask and Covid Pass: Boris Johnson Announces End of Plan B Restrictions in England
12:55 GMTCristiano Ronaldo's Issues Ultimatum to Man Utd: 'Qualify for Champions League or Else I'm Off'
12:55 GMTCoffee Rallies 'Good Bacteria’ to Boost Digestion, May Fight Liver Diseases, Claims Study
12:48 GMT'Even Xi Hasn't Left China': Pakistan FM Expresses Inability to Help Students Return to China
12:29 GMT'Hard to Digest': Prisoner in India Swallows Mobile to Hide It, Doctors Remove It After Surgery
12:09 GMTOne Killed After Policeman Opens Fire During Special Operation in Downtown Nice