Castro to Obama: Relations Won't Be Normal Until Guantanamo Returned 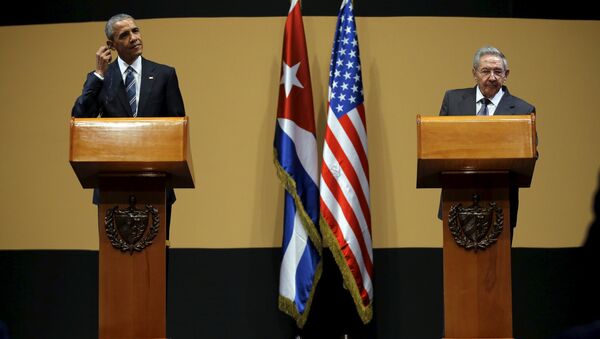 © REUTERS / Carlos Barria
Subscribe
As US President Barack Obama makes a historic visit to Cuba following a thaw in relations, Cuban President Raul Castro has stressed that complete normalization cannot be achieved until Guantanamo Bay is returned to Havana.

Meeting with Obama in Havana, Castro stressed that the US must abandon its territory at Guantanamo and lift its embargo against Cuba.

"Much more can be done if the embargo is lifted," he said. "We recognize the position President Obama is in, and the position his government holds against the blockade, and that they have called on Congress to lift it."

The Cuban president added that there remain "profound differences that will not disappear over our political model, democracy, human rights, social justice, international relations, peace and stability," and stressed that the Cuban people will not "relinquish what they have gained through great sacrifice."

Speaking to reporters, President Obama said he could not offer an exact timeframe for the end of the embargo, but stressed that Washington does not view Havana as a threat.

"What I have said to President Castro is that we are moving forward and not looking backwards, that we don't view Cuba as a threat to the United Statesm," he said. "The embargo's going to end. When? I can't be entirely sure. The fact that there has been strong support, not just inside of Congress, but also among the Cuban people, indicates that this is a process that should continue."

Still, the US does have concerns.

"People are still concerned about [human rights] inside of Cuba," Obama added. "We can't force change on any particular country, ultimately it has to come from within."

While recognizing these concerns, Castro said that no country on Earth can meet all international human rights standards. He hopes that all countries can work together to meet those standards.

According to a White House press release, the US and Cuba have already launched a joint effort to combat the Zika virus.

"The United States and Cuba have committed to deepen scientific and public health cooperation, focusing on communicable diseases including arboviruses such as Zika, dengue and chikungunya [and]…on the prevention and treatment of Chronic…diseases such as cancer," the White House said in a fact sheet released on Monday.

"In the coming months, the United States and Cuba intend to work toward finalizing arrangements to strengthen our collaboration in these and other scientific and health areas."

000000
Popular comments
CIRCUS and not BREAD.....To be realistic; Obama got not power at all, Obama is a Lame-Duck, he only could be counting the days to get out forever from The W.H... No Congress, nobody is going to support or approval any what he does... and forget Cuba, Cuba is small fish, in this world today... Europe, won't have any kind of treat between Europe and USA until next president.... so all this is just CIRCUS!!!
Mayoh
21 March 2016, 22:02 GMT
000000
and 1500 accredited journalists were sent to cover this??
michael
21 March 2016, 23:55 GMT
000000
Newsfeed
0
New firstOld first
loader
LIVE
Заголовок открываемого материала
Access to the chat has been blocked for violating the rules . You will be able to participate again through:∞. If you do not agree with the blocking, please use the feedback form
The discussion is closed. You can participate in the discussion within 24 hours after the publication of the article.
To participate in the discussion
log in or register
loader
Chats
Заголовок открываемого материала
Worldwide
InternationalEnglishEnglishMundoEspañolSpanish
Europe
DeutschlandDeutschGermanFranceFrançaisFrenchΕλλάδαΕλληνικάGreekItaliaItalianoItalianČeská republikaČeštinaCzechPolskaPolskiPolishСрбиjаСрпскиSerbianLatvijaLatviešuLatvianLietuvaLietuviųLithuanianMoldovaMoldoveneascăMoldavianБеларусьБеларускiBelarusian
Transcaucasia
ԱրմենիաՀայերենArmenianАҧсныАҧсышәалаAbkhazХуссар ИрыстонИронауОssetianსაქართველოქართულიGeorgianAzərbaycanАzərbaycancaAzerbaijani
Middle East
Sputnik عربيArabicArabicTürkiyeTürkçeTurkishSputnik ایرانPersianPersianSputnik افغانستانDariDari
Central Asia
ҚазақстанҚазақ тіліKazakhКыргызстанКыргызчаKyrgyzOʻzbekistonЎзбекчаUzbekТоҷикистонТоҷикӣTajik
East & Southeast Asia
Việt NamTiếng ViệtVietnamese日本日本語Japanese中国中文Chinese
South America
BrasilPortuguêsPortuguese
NewsfeedBreaking
08:45 GMTJapanese PM Kishida: Tokyo Eyeing Enemy Base Strike Capability Amid China and NK's Military Buildup
08:34 GMTBiden's Re-Election Bid: Should US Politicians & Justices of Advanced Age Undergo Cognitive Tests?
08:21 GMTAt Least One Killed in Northern Ireland as Storm Arwen Pounds Parts of UK
07:58 GMT'Dry Turkey' on 'Stolen Land': BLM Faces Twitter Backlash for Blasting Thanksgiving
07:25 GMT'End of an Era': Celebs Pay Tribute to Broadway Legend Stephen Sondheim
07:00 GMT'Thank God I Didn't Lose Any Teeth': Ovechkin Receives Stitches After Puck Blow to His Face
06:12 GMTNetizens in Grip of Guesswork After WHO Skips Two Greek Letters to Name New COVID Variant
05:55 GMTAustralia Halts Flights From 9 Southern African Countries Over Omicron Strain
05:24 GMTKanye West Says God Wants to Bring Him and Kim Together Again
05:10 GMTAs Indian Health Survey Suggests Women Outnumber Men Expert Claims 'This Isn't the Real Number'
04:50 GMTP&G Recalls Over a Dozen Old Spice, Secret Sprays After Detection of Cancer-Causing Chemical
03:47 GMTAlabama AG Threatens to Sue City Officials for Removing Confederate President's Name From Avenue
03:39 GMTOver 100 People Arrested in Solomon Islands After Riots in Honiara, Police Say
03:39 GMTMigrant Caravans in Mexico Head North After Slow Visa Processing by Authorities - Reports
03:34 GMTOutgoing UK Chief of Defense Staff Describes Russia as Most Acute Threat
02:59 GMTRussia, China Slam Idea of Summit For Democracy As It Contradicts Development of Modern World
02:30 GMTBoebert vs. 'Jihad Squad': GOP Rep. Buries the Hatchet With Squad's Omar Over Feud Caused by Remarks
01:53 GMT'As if Disney Were Entering Notre-Dame': Critics Blast Cathedral's 'Woke' Rebuilding Plan - Report
01:42 GMTMan Killed After Trying to Crash Gate of San Diego Military Base With Knife
01:07 GMTNew York Governor Declares State of Emergency Amid Spike in COVID-19 Infections