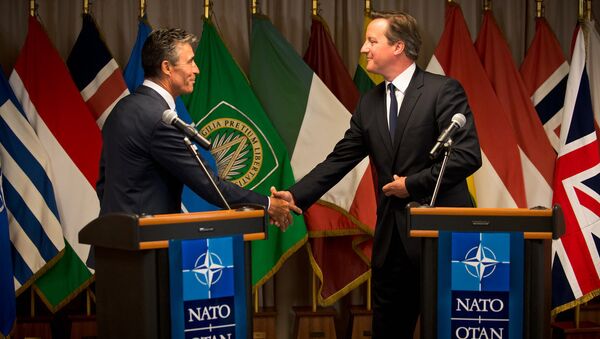 © Flickr / Number 10
Subscribe
International
India
Africa
Claims that the EU and the NATO military alliance could unravel with a potential British exit from the bloc have been rubbished by former British army Commander Colonel Richard Kemp, who says a Brexit from the EU could in fact benefit the UK's national security.

Reacting to claims from the chief of the US Army in Europe, Lieutenant-General Frederick "Ben" Hodges, who said that a Brexit would set a dangerous precedent during a time of increased international uncertainty, Colonel Kemp says that warnings over the EU and NATO disintegrating are not realistic.

Of the many complex arguments in favour of leaving the EU, defence and security is the most obvious and clear-cut. pic.twitter.com/C8fhoaDf5D

"I think clearly the leadership of the EU and our own leaders don't agree with general Hodges that the EU is likely to unravel, because if they did I think… we would have seen a much greater effort by EU leaders to help us [the UK] renegotiate our relationship with the EU in the way that this country wants it, and the way that the prime minister tried to achieve," he told the BBC.

"And the second issue is that if the EU unravels, if the other 27 members of the EU can't hold themselves together coherently without the UK, then you do have to ask questions about the whole future of the EU, whether we're in or out of it."

The comments come after US Army Lieutenant-General Hodges said he was "worried" that a potential Brexit from the EU would create division within the bloc, and ultimately "undermine" NATO efforts at countering what Hodges believes to be Russian aggression.

"Anything that undermines the effectiveness of the alliance has an impact on us, and so if the EU begins to become unraveled there can't help but be a knock-on effect for the alliance also," he said.

However retired British army chief Kemp, who was Commander of the British Armed Forces in Afghanistan, rejected the argument, saying NATO already consists of a number of non-EU countries.

Arguing that Britain was the second strongest member of the military alliance, Kemp said:

"I don't think that [EU membership] affects our position within NATO, and I don't think that the fact that one country of the European bloc is on a separate basis is going to significantly affect the NATO alliance."

Time is Right for Brexit

The former UK commander also rejected claims that it was essential for the EU to remain unified in light of current security issues facing Europe.

"I think this is exactly the time for it [British exit from the EU] because any other time is going to be either too late or impossible. We're looking now at the EU fast-tracking Turkey into EU membership, which puts the EU borders on the frontiers of Syria, Iraq and the Islamic State [Daesh].

"Do we want that, do we want our borders extended out there, do we want another 70 million people with the free ability to range around Europe at will? I think this is exactly the moment when we should be looking at moving out of the EU and I think that would without a doubt benefit our defense and our security."